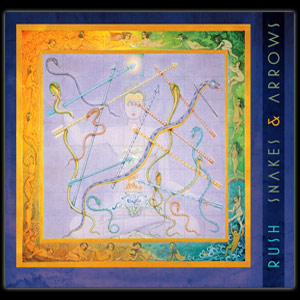 Thanks to a heads up from the Rush is a Band blog, I got to read a couple advance reviews of the upcoming Rush album, Snakes & Arrows. The first one is rather brief, and I’m not convinced it’s all that accurate anyway. The reviewer compares the “Far Cry” single to the Permanent Waves album, which suggests to me that he either didn’t listen to the song or has never heard Permanent Waves. Further compounding the confusion, he implies that Vapor Trails wasn’t all that heavy. Wha?!?! That’s a new one. Well at least the review is positive, so that’s nice.

The second review seems a little more with it, but is also positive. I won’t go into the details, but it’s worth reading. It is very nice to hear that we will finally get some Alex Lifeson solos – I was worried after hearing none on “Far Cry.” It’s hard to get a mental picture of what the new album might sound like based on the 2nd review, as it throws a few too many metaphors out there. But overall it seems like it will be heavy, loud, and progressive (as long as it’s mixed cleaner than Vapor Trails it’s all good). I’m personally not expecting a return to the glories of A Farewell to Kings, but that probably would sound weird anyway at this point in Rush’s career.

Oh yeah, and the tour dates have been announced. PNC Bank Arts Center in July – I am so there. Giggity!