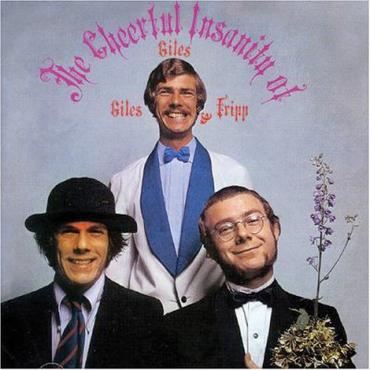 Just one year before prog-rock titans King Crimson released their first album, two-thirds of that band released their first and last studio album as the erstwhile trio of Giles, Giles & Fripp — guitarist Robert Fripp, Peter Giles on bass and brother Michael on drums. Released in 1968, during the height of the Psychedelic era, The Cheerful Insanity of Giles, Giles & Fripp promptly sank into oblivion. But believe me, it’s worth revisiting.

If I had to surmise a reason why this album tanked, I’d say its oddly eclectic songs are a contributing factor. The album has a generous dose of cheeky, Kinks/Pythonesque humor, but most of the acts of the day were practicing a much darker and substantive form of psychedelia. Had this album been released even a year or 18 months earlier, it might have had a chance. But compared against Pink Floyd, the Doors, and even the post-Sgt. Pepper‘s Beatles, GG&F seem rather lightweight. It’s not quite progressive enough to be prog rock, and probably a little too jokey for its own good.

The songs on side one (for those who remember vinyl records) are tied together thematically by a narrative called “The Saga of Rodney Toady,” a series of between-song vignettes about a fat kid with no friends and dim prospects for a future love life. Trust me, it’s funnier than it sounds, although the joke wears thin on repeated listens. The opening track, “North Meadow,” is one of the strongest on the album and features some nifty fretwork from Fripp, restrained but tasty drumming and some beautiful vocal harmonies. Other than “Call Tomorrow,” the rest of the first half is rather light, airy, and yes, cheerful.

The rest of the songs on the first half of the album are pleasant, but not necessarily remarkable. Still, there’s an undeniable charm to them and they managed to grow on me. A foreshadowing of King Crimson can be heard on “The Crukster,” a brief but dark interlude.

Side two is held together by the narrative concept “Just George,” which is basically a gag where one sentence is repeated in between songs, with the words rearranged each time. The cheeky nature of the album gives way for the final two songs, “Suite No. 1” and “Erudite Eyes.” The former of the two is an engaging instrumental piece featuring some superb guitar work from Fripp.

Unless you actually get a vinyl copy of Cheerful Insanity, you’ll also find six bonus tracks. Four of them are simply stereo or mono single versions of previous album tracks, with two originals. The first of these two, “She Is Loaded,” is easily the better. It probably most closely resembles Syd Barrett-era Pink Floyd with even more odd lyrics. The opening vocal harmony is pretty stunning to boot.

If this doesn’t sound like a glowing recommendation, it’s only because it’s hard for an amateur like me to convey what it is exactly I like about The Cheerful Insanity of Giles, Giles & Fripp. I didn’t really know what to make of it the first few times I heard it, but there was a period of a few weeks where I listened to little else. This album probably won’t make any Desert Island Disc lists, but maybe a Jersey Shore mix?

« Hey ABC? Next time, maybe do a little research.