A Gallery of Forgettable Sports Cards

I can’t begin to calculate the number of hours I spent as a lad collecting, storing, and trading sports cards. I never cared about their monetary value (unlike many of my friends). I simply enjoyed the experience of opening the packs, looking at the pictures, and filling in holes in my collection. It’s a good thing too, as 99% of my collection isn’t worth the paper it was printed on.

I got out of the sports card scene right about the time it became more of a business venture than a hobby. And now thanks to unscrupulous manufacturers, collectors, and dealers the industry exists now as a shadow of its former glory. There are many reasons for this decline, but as I dug through the remnants of my collection the other day the common denominator occurred to me – most of the cards flat out sucked. Lame pictures of below-average pro athletes may have been appealing at one time, but now they’re blog fodder.

While there are hundreds of potential examples of this suckitude I could share with you, I only had the patience to scan a handful:

Up first we find sub-par pitcher Jerry Augustine cozying up to a clipboard on the dugout steps. I know he actually pitched in 1983, because the back of the card tells me so. But why bother with a photo of that when a kid can gaze upon the immortal image of him taking notes?!

Next up is journeyman outfielder Jay Johnstone, sporting an ultra-classy and fashionable Budweiser rain hat. While 1983 may not have been a banner year for Jay (.257 average, 6 HR, 22 RBI), is this really the best Fleer could do?

Finally here’s Glenn Hubbard, taking advantage of “Free Reptile Day” at the ballpark. Sure it’s a cute picture, but I have a similar one from my honeymoon and I wouldn’t dare sell it on a trading card.

No longer content with waiting for rookies to make it big and reap the benefit of increased card value, Pro Set included a series of “Pro Set Prospect” cards featuring highly touted players who had yet to sniff an NFL down. And for every prospect that actually made it in the NFL, you had a dozen busts like Tony Mandarich. This was a jaded and misguided attempt to artificially drive card value up.

And this card features what is presumably a scouting photo of wide receiver Don Beebe, although it looks more like a frame from the Zapruder film. While it sure looked mysterious enough, it made for a crappy card.

I’m sure announcer cards seemed like a clever idea during some pitch meeting, but come on now. Imagine tearing open a pack of football cards, hoping for a Joe Montana or Barry Sanders, and getting Bob frigging Costas. And he was one of the bigger names in the set. 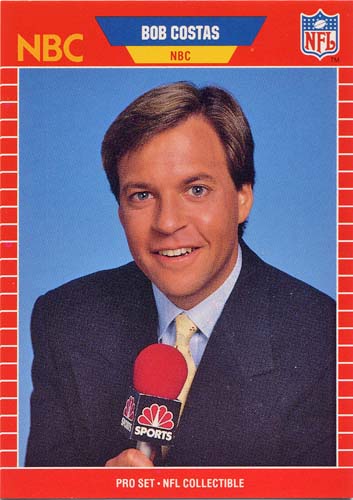 Head coach cards were only slightly better (and more relevant) than announcer cards, but not by much.

I don’t know of many kids who would willingly pay for lectures, but that’s just what they got with this portion of Pro Set’s 1992 hockey card set. The back of each card came with a quote designed to drive home the theme of that card. On this one Winnipeg Jets goaltender Bob Essensa tells kids, “When things go wrong, you have to pick yourself up and start again.” Thanks Bob, for the moving words. Can I have my money back now?

C’mon, if you’re not even going to try to come up with a realistic name, why bother?

« Hansen and perverts and tasers that sting…

There was, in fact, blood »

12 thoughts on “A Gallery of Forgettable Sports Cards”