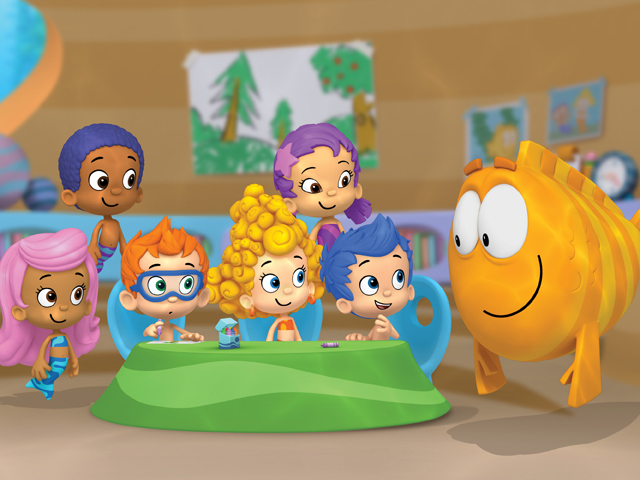 Some kids’ shows are tolerable. You can get through them but wouldn’t ever seek them out on your own. Others are painful to watch (I’m looking at you, Dora the Explorer). You suffer through because you love your children. And some are enjoyable in their own right. You gladly watch them with your kids, and you may even tune in after they’ve gone to sleep for the night.

I think that out of all the shows I get to (have to) watch because of my son, Nick Jr.’s Bubble Guppies is my current favorite. It’s a cousin of sorts of another Nick Jr. show, The Backyardigans, but is far superior in almost every way. Let’s break it down:

In Bubble Guppies, the main characters (shown above) live in Bubbletucky and go to school together. As you might expect, the show is all about setting up and delivering a lesson of some sort, and learning about various topics along the way. The show trades heavily on skit humor and upbeat, modern singing and dancing. A perfect example of the latter is the “Outside Song” that is performed in every episode. I’m going to warn you now that once you watch this, it will be stuck in your brain for days.

In fact, the music really is the star of the show. From the insanely catchy theme song to the incidental music, it’s all very professionally produced and executed. Imagine if the performances on Glee didn’t make you want to stab your brain with a Q-Tip and you get the idea.

As for the humor, it’s really hard for a show to pull off jokes that adults can appreciate but that doesn’t zoom over kids’ heads. I think for the most part Bubble Guppies pulls this trick off quite well. It’s very cute and earnest without pandering or being too saccharine. Think of it as an alternate SpongeBob universe that isn’t completely demented.

The voice acting is very well done. The producers found a good group of kids to play these characters — Angelina Wahler as Deema being my favorite — and Tino Insana is a perfect fit as Mr. Grouper. He reminds me just a bit of Vizzini (Wallace Shawn) from The Princess Bride.

Visually, I dig the show. It’s bright and colorful, and the CGI is really snappy. It moves quickly but isn’t hyper, which again can be hard to pull off.

Overall, I really like Bubble Guppies in case you couldn’t tell. As I was browsing YouTube clips I saw a lot of comments from adults that enjoy the show in a non-ironic way. I am now one of them.