Album cover of the week: At War With the Mystics 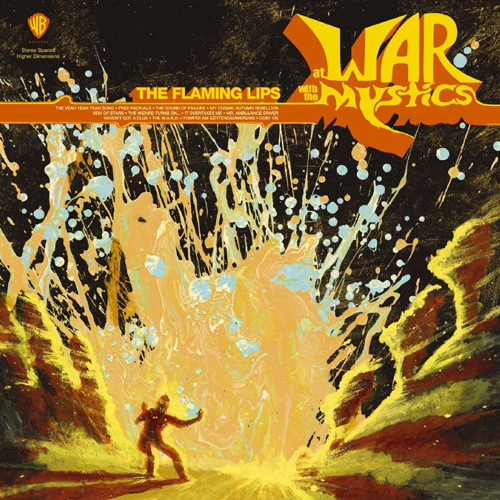 There are a handful of album covers from the Flaming Lips’ discography worth of enshrinement as part of this series.  But for me it came down to a choice between their two best – Yoshimi Battles the Pink Robots and the ultimate winner, At War With the Mystics.  I was tempted to go with Yoshimi because I like the album more, but this cover is just so damn good:

My internet sleuthing tells me the cover art credit goes to Dan Lazenby, although I’m open to corrections on that.  Regardless, I love the mood created by the bright, explosive imagery and funky title font.  It looks it could be the cover of a musty old paperback book you stumble across while browsing the oft-overlooked Fantasy/Sci-Fi section at a rummage sale or flea market.

Right under the Warner Bros. logo it says “Stereo Spaced Higher Dimensions.”  Yeah, that about sums up this album.