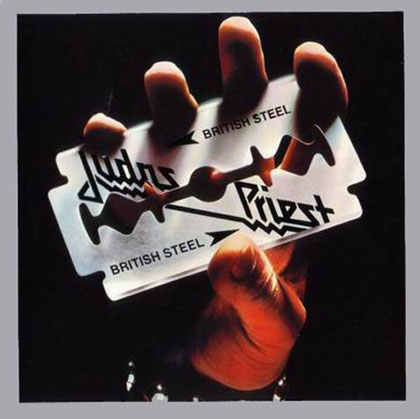 As we approach this most American of holidays this week, I thought I’d throw a curveball and present the cover from one of the quintessential albums of the so-called New Wave of British Heavy Metal movement.

Released in April 1980, Judas Priest’s British Steel is one of the seminal albums of heavy metal. The music is reflective of the cover art — brutally simple and simply brutal. The group had been refining its approach since their 1974 debut, Rocka Rolla. Gone were the slow-building gems and gentle numbers from albums like Sad Wings of Destiny and Killing Machine (aka Hell Bent for Leather in the U.S.).

In its place are nine slabs of vintage headbanging glory, such as “Breaking the Law”, “Metal Gods”, and “Living After Midnight”. Scott Ian commented on the record title when he said, “How does it get more metal than that?”

The answer is none…none more metal.