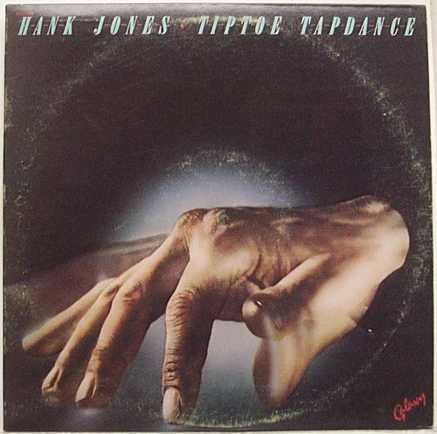 While he doesn’t get the widespread acclaim of jazz pianists like Bill Evans, Thelonious Monk, or Dave Brubeck, Hank Jones has nonetheless been producing music of a high caliber for decades. 1978’s Tiptoe Tapdance, originally released on the Galaxy Records imprint (a subsidiary of the more well-known Fantasy label) came out when Hank was 60 years old, and as of this writing he’s been playing pretty consistently for the 30 years since its release.

Alas, the best image I could find (meaning the largest image that was also in decent shape) was from a used record site.  For those under 30, those light circles on the cover are not part of the image; they’re what’s known in the business as ring wear.

Admittedly, the clumsy cropping job at the wrist indicates that Galaxy probably didn’t have a huge budget for graphic design.  Still, it’s eye-catching at least.