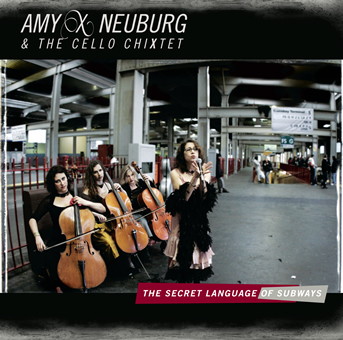 Just when I start to pat myself on the back for expanding my musical horizons so much over recent years, along comes an album like The Secret Language of Subways to set me straight.  The record, a collaboration between English-born composer and vocalist Amy X Neuberg and the Cello ChiXtet, is billed as “a song cycle about the inane and perpetually unfinished businesses of love and war – and New York.”  I’m not really sure what that means, but it sure sounds impressive.

Make no mistake, this album is definitely Art with a capital A.  The opening track, “One Lie”, unfolds slowly before reaching an almost martial crescendo.  It sets the stage for Neuberg’s elastic, Kate Bush-like vocals and the playing of the ChiXtet (Elizabeth Vandervennet, Elaine Kreston, and Jessica Ivry), which is alternately subtle and forceful – sometimes within the space of a few minutes. Neuburg is a classically trained singer, and while her multi-octave vocals are the driving force of this album she contributes a lot by way of electronics, looping, and percussion.

The first time I listed to Subways, I felt in danger of drowning in its bold avant garde-ness.  Neuburg’s compositions twist and turn and the proceedings get downright weird in places.  Fortunately there are some safer harbors for those who want to explore the album and not feel too intimidated – “Difficult” (oddly enough), “Someone Else’s Sleep”, and “Body Parts” are recommended songs for the uninitiated.  But wouldn’t you know it, on just my second trip through her vision of underground New York, things didn’t seem so strange.

And the topper is the final song, Neuburg’s arrangement of “Back in NYC” from the classic Genesis album The Lamb Lies Down on Broadway.  Stripping the song down to its essence and delivering the lyrics with a little less seriousness than Peter Gabriel turns out to be a triumph for Neuburg and the ChiXtet.  I’d be really interested to hear more of her prog interpretations.

I think my feelings on The Secret Language of Subways can be best summed up by Neuburg herself, in a line from “Difficult”:

“Everyone knows that nothing is any good unless it’s difficult”

Yeah, I can see that.

The Secret Language of Subways will be released by MinMax Music on August 4.