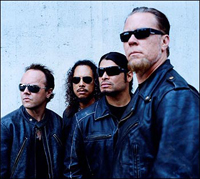 Here’s the dirty little secret that both fans and detractors of Metallica seem to forget from time to time.  Rather than being a faceless musical entity, they’re really just four human beings who have grown and changed a great deal since 1983.  And don’t tell anyone, but so have their fans (well, most of them)!

I was just shy of 13 years old when …And Justice for All came out in 1988.  Imagine if I conducted my daily affairs as if I were still in junior high school.  How far do you think I’d get in life?  Not very far, right?  So why is it that it’s perfectly OK for people who grew up, grew older, and matured as people while listening to Metallica seem so unwilling to allow the band to do the same?

OK, I think I’ve made my point.  Now onto Death Magnetic.

Plain and simple, this is a good album.  Very good in fact.  It’s an interesting blend of some of the group’s styles over the years.  A ton of reviewers (myself included) have already noted that it’s sort of a hybrid between the straightforward, melodic riffs of The Black Album and the complex, pseudo-prog structures of …And Justice for All.

There’s an abundance of vintage thrash rhythms and blistering Kirk Hammett solos, which should please the diehards.  But it’s also got some of the grooves and more moderate tempos found on (gasp!) Load.  They’re blended together in a stew that sometimes tastes hearty and fulfilling, sometimes a bit forced and artificial.

Things start off very strongly, as “This Was Just Your Life” and “The End of the Line” showcase all that Metallica has learned over the years.  A cynic would accuse them of plagiarizing themselves on these and other songs, but I don’t look at it that way.  A lot of this music draws on the best of the band’s earlier incarnations and shows them doing familiar things in a new way.

I love the mix of vintage thrash and modern groove on “Broken, Beat & Scarred” and “The End of the Line.”  I appreciate how most of the songs here, averaging at about the 7-minute mark, at least feel like they merit the length.  By contrast, one of the major weaknesses of St. Anger was a lack of editing.  More than a few times I found myself saying, “enough already!” on that album.

Alas, this is not a perfect album by any means.  Fans may bristle at the many similarities between both the song sequence and structure on Death Magnetic.  Yup, “The Day That Never Comes” is a close cousin of “Fade to Black.”  And producer Rick Rubin’s decision to take a more natural approach to recording the always inconsistent Lars Ulrich’s drums backfires on occasion.  As is usually the case, the bass guitar is buried fairly deep in the mix.  New bassist Robert Trujillo’s presence is more felt than heard.

And lastly, this is not a uniformly strong effort.  The second half in particular is weaker than the first, save for the superb “Cyanide” and “My Apocalypse”.  Death Magnetic is definitely front-loaded, but the strength of that material is more than enough to compensate for the rest.  Sure it’s not Master of Puppets revisited, but that’s just fine by me.  I’m not a teenager anymore either.

« Something about the duality of man