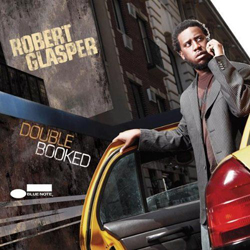 It is tempting and easy to interpret the meaning behind the track order and title of Robert Glasper’s latest album, Double Booked, as being a presentation of the artist’s two separate sides – jazz and hip hop/R&B.  Certainly, given that the first half of the record is billed to the Robert Glasper Trio while the second is credited to the Robert Glasper Experiment, that conclusion seems inescapable.

But to look at it this way would be to miss the statement that Glasper has been making with his music since his 2003 recorded debut, Mood – jazz, R&B, and hip hop are not disparate elements to be combined or mixed by Glasper for mere novelty or effect; they are both integral and inseparable parts of his artistic vision.

It’s that vision, combined with his prodigious talent, that makes Double Booked Glasper’s most ambitious and – at times – rewarding work to date.

The Trio half of the the album starts with “Intro”, a short voice mail to Glasper from jazz trumpeter Terence Blanchard. Blanchard has Glasper’s trio booked for a club gig, but wants to make sure it’s still on because he’s heard that the Robert Glasper Experiment is booked for the same night. Double booked, get it?

What follows over the next five tracks is Glasper’s trio (with longtime bassist Vicente Archer and relatively new drummer Chris Dave) flexing their considerable jazz muscles on what is to my ears becoming known as the “Robert Glasper sound”.  I’m not a musician so I can’t put what I mean by this into words, other than to say that this music makes perfect sense given the albums that have come before.  On the more uptempo numbers (“No Worries” and “Think of One”) the interplay between the three is astonishing.  Dave may just be one of the most inventive and exciting jazz drummers on the scene, and he and Glasper shine throughout the proceedings.  Archer is a fine bassist, but seems to function as more of an anchor for the other two.

One underrated aspect of Glasper’s arsenal is his touch on mellower numbers, and on this count he delivers again.  “Downtime” and “59 South”, while not particularly revelatory from a melodic standpoint, showcase the beauty Glasper can bring to his music.  It’s not the gossamer strands of melody you might expect from a Bill Evans, however.  It’s more of the full-bodied and complex approach favored by the current generation of pianists like Brad Mehldau.

The highlight of the trio set is, perhaps surprisingly, “Yes I’m Country (And That’s OK).”  With just a hint of countrified melody peppered throughout it’s a shimmering beauty of a song, and reminds me a bit of some of Pat Metheny’s finer compositional moments.

Next comes the part that may leave some scratching their heads; the half-dozen cuts by the Robert Glasper Experiment.  Driving home the theme of duality, the second half of Double Booked kicks off with yet another voice mail (on “4eva”), this time from Roots drummer ?uestlove. ?uestlove has heard that the trio is booked for a gig but invites the Experiment (Glasper, Dave, bassist Derrick Hodge, and saxophonist Casey Benjamin) to jam with the Roots (as well as Mos Def and Bilal).

The first major salvo from Glasper that indicates he’s not interested in being pigeonholed as a jazz musician is a slinky and jittery take on the Herbie Hancock classic “Butterfly”.  With Glasper on Rhodes piano and Benjamin on vocoder of all things, it’s a rather jarring change from the first half of the album.  But in a strange way it just feels right.  “Festival”, the next number, actually sounds like it could be a missing track from Hancock’s Headhunters period.  It’s elastic and pulsing, and while it could be called experimental it never goes off the rails or sounds self-indulgent as so much experimental or avant garde music can.

After a pleasant interlude (“For You”), Double Booked ends with a pair of very strong tracks – “All Matter” (which features Glasper’s friend Bilal on vocals) and “Open Mind”.  The two songs are a deft fusion of jazz, R&B, and soul that I have to imagine is indicative of where Glasper wants to go with his music in the future.  More than any other songs on the album they are clear indicators that if nothing else, Glasper is ever exploring and experimenting.  For what that is remains to be seen but luckily for us, we get to come along for the ride.