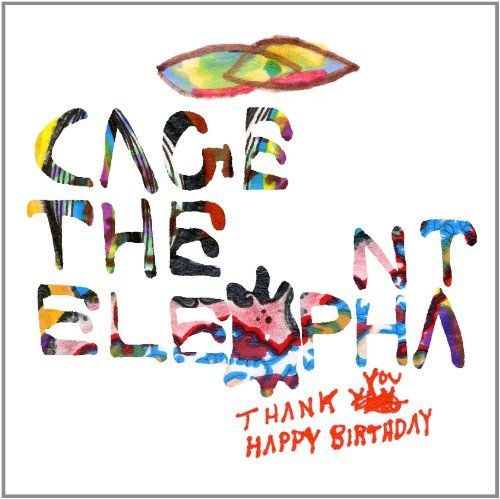 I didn’t make a New Year’s resolution to listen to more new music in 2011, but it just seems to be working out that way.  And so far I’ve been rewarded with some pretty decent stuff.  Will the good times continue?  Let’s find out…

Here’s another group that managed to become pretty popular without even appearing on my radar.  I can’t speak to how Cage the Elephant may or may not have changed since their first album, but this one is pretty damn good.  For a so-called indie rock band, Cage the Elephant displays a real knack for catchy aggression and a willingness to incorporate whatever sounds and styles necessary to get their point across.  Album opener “Always Something” nails the slinky, urban vibe that My Morning Jacket went for on Evil Urges, and immediately piqued my interest.  Penultimate track “Japanese Buffalo” kicks off with a doo wop intro before heading into post-punk bluster.

The pacing on Thank You, Happy Birthday is one of the selling points here.  It’s one modern alt-rock mover after another (love the pulsing confidence of “Indy Kidz” juxtaposed with the breezy pop/rock of “Shake Me Down”), which kept things rolling nicely until the first song approaching ballad status, “Rubber Ball”, makes a welcome appearance.  Just two albums into their career, Cage the Elephant seems to understand that the worst crime most indie bands commit is to either take themselves too damn seriously or to not even try to write memorable songs.

Cold War Kids – Mine Is Yours (Interscope)

Seriously, is this even the same band that released Robbers & Cowards?  Because that band had a unique sound, captivating songs, and a bright creative future.  This band has apparently sold their souls for a shot at mainstream success.   I’d be more accepting of the notion that maybe the band simply wants to find a new direction had they actually stuck with the old one for more than an album and a half.  It’s not that the music is bad, because it isn’t.  Tracks like “Royal Blue” and “Mine Is Yours” have plenty of bounce and catchy songcraft, but I feel dirty listening to them.  Rather than be impressed that such a quirky and slightly acerbic group can produce such a commercial-sounding album, I can’t shake the feeling that this is a cynical attempt to cash in on a trendy sound. If I wanted to listen to a damn Kings of Leon album I’d buy one.

Having never listened to Deerhoof, a band with ten records already under their belt, why start now with Deerhoof vs. Evil?  I guess I just like to keep challenging myself.  And sure enough, this is a challenging album.  Not because I don’t like it, but because there’s so much to take in.  The musical sensibilities on display are similar to Of Montreal, just less spastic.  Clearly the band is bursting at the seams with ideas, and it’s to their benefit that they can get them out without spinning off into some kind of absurd, avant-garde world where few would dare to follow.  Songs like “No One Asked to Dance” and “Hey I Can”, for all their offbeat arrangements, wear their pop hearts on their sleeves.

I bet an album like Deerhoof vs. Evil would gain a much broader audience if it stripped away the arty experimentation and focused on the group’s clear knack for melody and Satomi Matsuzaki’s charmingly demure vocals.  But then it probably wouldn’t be Deerhoof, would it?  And based on what little I’ve heard of them so far, that wouldn’t be a good thing.

« Listening booth – “We Have All the Time in the World”