I don’t know if you’ve seen these awful “All because two people fell in love” signs, but they’re inescapable these days.  They’re usually found either as stand-alone signs or as a frame full of pictures of peoples’ kids.  The first time I saw one of these, I thought it was kind of sweet – in a somewhat treacly sort of way.

Now the damn things are everywhere, and I’ve grown to loathe them.  The only thing worse than trite sentimentality is mass-marketed trite sentimentality, and this little saying is the verbal equivalent of those posters with the dressed-as-adults kids kissing or holding hands.  Or even worse, Anne Geddes posters.  *shudder*

So as an alternative, I offer up a few variations on this “All because…” theme that are a little more grounded in reality.  Feel free to print any of these and hang them in the high-traffic room of your choice! 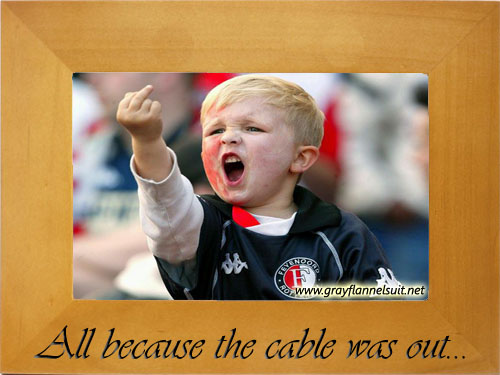 "all because two people fell in love"