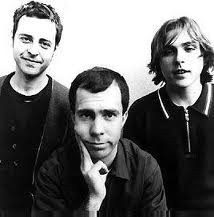 It’s a rare pleasure when one of your favorite bands gets back together to play, long after having broken up (well unless you’re a fan of Kiss, Eagles, The Police, etc.).  It’s rarer still when they spend their lone reunion show playing one of your favorite albums of all-time.

But it happened for me when Ben Folds Five got together about a month ago for a one-off concert at UNC-Chapel Hill’s Memorial Hall to play the entirety of their criminally overlooked swan song, The Unauthorized Biography of Reinhold Messner.  That’s right, the whole thing – Ben’s dad even came out to recreate his answering machine message as heard on “Your Most Valuable Possession.”  How fucking cool is that?

To me, the band sounds like they’ve never been apart.  The only giveaways are Ben hiding what appears to be a bit of Friar Tuck action going on with his hair, and Robert Sledge’s additional poundage (life’s been good I guess).

I wasn’t there to witness this amazing moment, sadly, but MySpace’s cameras were (it was part of their Front to Back concert series).  Yay! So until the hopefully inevitable DVD concert release, I’ll have to get by with their video of the event.  And for your viewing pleasure I’ve included a few of the highlights here:

The performance is interlaced with interview clips featuring Folds, Sledge, drummer Darren Jessee, band producer Caleb Southern, and others (like Chris Walla from Death Cab for Cutie) talking about the band and the Reinhold Messner record.  Sadly, the video does not feature the encore songs:

Can you handle another trailer for Harry Potter and the Half-Blood Prince? »