Book report: The Genius in All of Us: New Insights into Genetics, Talent, and IQ 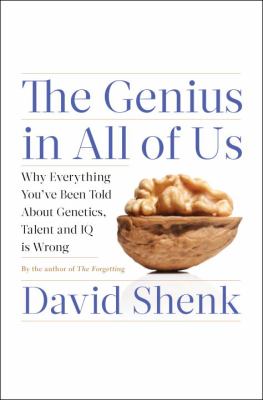 For those of you who, like me, are reasonably intelligent folks who have long wondered why you weren’t bestowed with outrageous genetic gifts like musical genius or athletic ability, have I got the book for you! It’s The Genius in All of Us: New Insights into Genetics, Talent, and IQ by David Shenk.

OK, I’m being a little facetious. But honestly, Shenk’s book offers a lot more than just a purely scientific analysis of the nature/nurture debate. To my surprise, The Genius in All of Us is a bit of a hybrid — part case study, part self-help/motivational literature. He lays out the premise right away in the prologue, telling the story of how baseball legend Ted Williams became one of the game’s most feared sluggers not by sheer chance (nature), but by simply busting his ass for years (nurture).

The theory underpinning the entire book is that environment plays a much larger role in how our intelligence is developed than crude tools like IQ tests would indicate. He expresses this with the formula GxE (or Genes multiplied by Environment), as opposed to G+E (Genes plus Environment). The implication is simple but powerful — inside each of us is the potential for high levels of achievement. All that is missing for most of us is the right environment.

Shenk provides ample examples of his theory in action. He examines the lives of Mozart, Yo-Yo Ma, Williams, and Kenyan marathoners, and Jamaican sprinters among others as proof that “giftedness” is an outdated notion. Mozart’s genius did not just spring to life right from his DNA, Shenk argues, but was largely the result of intense dedication on the part of his father, Leopold, who was relentless in his efforts to turn his son into a success.

Likewise, Shenk argues that the unreal success of Kenyan runners has more to do with the culture they are raised in than any genetic advantage geared toward running long distances. The same goes for sprinters in Jamaica, who are revered on that island the way football or basketball players are in the United States.

The interesting thing about The Genius in All of Us isn’t the case studies Shenk quotes or the anecdotes he shares, but rather the overwhelmingly positive message he tries to impart. He stops at several points in the book to speak directly to us and let us know that, yes, you too can achieve all of this with some good old-fashioned stick-to-it-ive-ness!

I am not versed enough in the fields of genetics, behavioral studies, or whatever else deals with this whole thing, to say whether or not Shenk is onto something or merely deluded. You can easily find fairly lengthy refutations of this book from a number of sites and publications. My gut tells me that there is probably some truth in what Shenk writes, but that it’s not quite so simple as he would have us believe.

By the way, if you’re thinking of purchasing this book you should be aware that the actual content only covers about half of the 300+ page total. The entire second half of it is devoted to research notes, additional source citations, and the like. Perhaps The Genius in All of Us would’ve been a more substantial read had these pages been integrated into the main text.

« Football Friday: How does a quarterback make the Hall of Fame?

Saturday Night Live is just now catching on to Millennials »