Book report: The Murrow Boys: Pioneers on the Front Lines of Broadcast Journalism

It’s hard to imagine, especially for those of my generation or younger, but broadcast news was not always a wasteland of vacuous celebrity gossip, shallow political “analysis”, or crude sensationalism.  There was in fact a time when the men and women who called themselves broadcast journalists were actually journalists first, broadcasters secondly.  A time when networks valued the insight and knowledge these broadcasters brought, with not nearly as much regard for profit.

And for a period of almost 20 years starting in the late 1930s, there was one group of broadcast journalists more insightful, knowledgeable, professional, and popular than all others.  They were the Murrow Boys, started and led by the legendary Edward R. Murrow.  While most people still know his name, the names of the crack team he assembled have been largely forgotten – they were Mary Marvin Breckinridge, Cecil Brown, Winston Burdett, Charles Collingwood, William Downs, Thomas Grandin, Richard C. Hottelet, Larry LeSueur, Eric Sevareid, William L. Shirer, and Howard K. Smith.  Under Murrow’s leadership these men (and woman) wrote the rules of modern broadcast journalism, risked their lives to bring the story of World War II to millions, and set standards of professionalism that seem to have been largely abandoned since.

The stories of each of the Boys is told (some in more detail than others, naturally) masterfully in The Murrow Boys: Pioneers on the Front Lines of Broadcast Journalism

by co-authors Stanley Cloud and Lynne Olson.  After reading it I have a much greater appreciation for and knowledge of this group’s accomplishments in journalism, but additionally I was fascinated by how much they were able to accomplish in spite of their numerous vices and flaws.  Truly there was strength in numbers with Murrow’s Boys.

The book picks up in 1937.  While radio had already woven itself into the fabric of Americans’ lives, it offered little else besides entertainment.  News, such as it was, amounted to nothing more than uninformed commentary delivered by the likes of Boake Carter of the Columbia Broadcasting System (CBS).  When Carter’s anti-Roosevelt, diatribes became too much for CBS owner William S. Paley, he was taken off the air for good.  Paley and his executive team understood the rising threat posed by Adolph Hitler, as did two recently hired CBS employees – Edward R. Murrow and William L. Shirer.

Murrow and Shirer formed the core of the Murrow Boys and laid much of the foundation for what was to come.  Their story was an entertaining one to read, even if it ultimately became a sad one.  The book details how Murrow and Shirer, through sheer audacity and force of will, forced CBS to take the job of broadcasting the news seriously.  Without their efforts, it’s doubtful (but still possible) that World War II as heard on the radio would’ve been anything more than dry recitations of Army press material.

The first half of The Murrow Boys is a gripping account of how Murrow formed his team.  The men he hired usually lacked any sort of broadcast experience, but they were all talented journalists and that is what Murrow wanted above all else.  There were no talking heads or empty suits back then.  While Murrow was largely based out of London, his team spread all over the European and African theater of war and battled invading armies, hostile governments, military censors, and not least of all crude technology to bring up-to-the-minute reports to an American populace on edge.

Time after time Murrow’s team found themselves in as much danger as any soldier.  Murrow himself watched German bombs fall on London from his hotel room during the Blitz.  Eric Sevareid barely escaped Paris when it was captured by the Nazis in 1940, one day after the French government had already left.  In August 1943 he was on board a plane to China when it crashed in the mountains of Burma, and Sevareid spent two weeks with a local tribe (the Nagas) that he only later found out were notorious headhunters.

Howard K. Smith, who replaced Shirer in Berlin, left the German capital on the last train out before the United States entered the war.  To stay would surely have put him in the crosshairs of the Gestapo, who were already closing in on him.  Dick Hottelet (while an employee of United Press) had already spent four months in prison in 1941 on suspicion of espionage.  Hottelet, Collingwood, LeSueur, and Downs later landed alongside the Allied force on the beaches of Normandy during D-Day.

The bravery, accomplishments, and general derring-do of the Murrow Boys during the war made the second half of the book all the sadder.  It covered the post-war period and detailed first the slow disintegration and dismantling of Murrow’s team, and later the eroding of the journalistic standards they worked so hard to create and uphold. 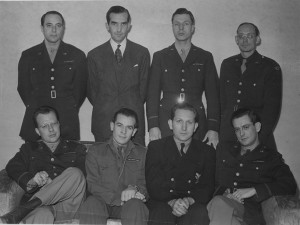 While CBS loves to trot out Murrow’s name with pride, what this book reveals is just how shabbily he and the others were treated.  In the name of increasing profits and “objectivity”, CBS censored and marginalized its biggest names throughout the late ’40s and into the ’50s.  Some, like Smith, quit out of disgust.  Most, like Collingwood or Sevareid, faded into the background as people like Walter Cronkite and, later, Dan Rather rose to prominence.

Cloud and Olson, often through quotes from their subjects, pull no punches as they take CBS to task for tarnishing their own legacy.  I found it particularly interesting that while I always thought of broadcast news standards dropping seriously only in the last 20 or so years, the book posits the decline as far back as the 1950s.  Cronkite and Rather come off considerably less well than I think the public at large views them.

The Murrow Boys is an engrossing read, and it works on many levels.  It’s full of great character studies, it’s got tons of great historical meat to chew on, and it’s simply well-written and researched to boot.  We’ll probably never see the likes of Edward R. Murrow or his Boys again, but at least we can take comfort that their legacy is recorded somewhere.

« I hope zombies are scared of toys and/or stationery