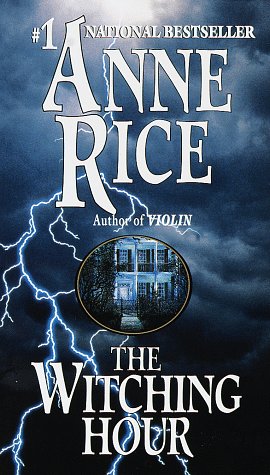 Having only read one other Anne Rice novel (you guessed it, Interview With the Vampire), I learned some interesting things about her from reading her beefy 1990 tome, The Witching Hour.  I learned that she can make a book interesting even if there are actually no vampires in it.  I learned that New Orleans, in addition to being a magical place indeed, has some really beautiful flowers.  And I learned that Anne Rice sure knows a lot of different ways to describe human genitalia.

So yes, the book is interesting and even engrossing in parts and starts off with real promise. In the bar of a New York hotel a doctor remembers a most disturbing assignment – administering tranquilizing drugs to a young, catatonic woman named Deirdre.  But rather than living as a patient in a mental hospital, Deirdre sits, stupefied, in a rocking chair on the porch of her decaying antebellum home in New Orleans’ Garden District and is tended to by her elderly aunts.

Rice drops a lot of hints in these early pages that will take on greater significance later (the emerald Deirdre wears and the name Lasher for starters), but oddly enough the doctor is not one of them.  He’s really more of a human MacGuffin than anything else.  But here and throughout most of the book, Rice takes a long damn time to describe things and often does so multiple times with the same things.  I could probably pass a college course in botany for all I read about the beauty and delicacy of New Orleans flora.

The rest of the first part introduces us to the main characters.  First there’s Michael Curry, a contractor and home restoration expert living in San Francisco and suffering from the aftermath of a near drowning.  That aftermath, namely, is his newfound ability to touch people or objects and receive a flood of images concerning their past.  His new power is exciting at first but quickly becomes a curse, and so Curry locks himself away and takes up alcoholism in his spare time.

Next is Dr. Rowan Mayfair, brilliant neurosurgeon and possessor of her own mysterious power.  Rowan’s power is her uncanny ability to heal people by manipulating their cells, which comes in pretty damn handy as a surgeon.  Rowan lives in Tiburon, near San Francisco, and loves to sail on her boat, the Sweet Christine.  Oh and get this – turns out Rowan was the one who rescued Michael from drowning!

As you might expect, Rowan and Michael’s paths cross, helped in large part by Aaron Lightner – charming Englishman and member of the Talamasca, a secret society that has been tracking the activities and lives of the Mayfair family almost from the beginning.  Lightner is sort of the book’s Obi-Wan Kenobi – guiding and teaching, but never insisting.  Rice goes into great detail about Lightner’s past, but I really didn’t care and you probably won’t either.

Speaking of which – Rice could’ve saved at least 20-30 pages but not going into minute detail about almost every single character in the book.  When a character’s lifespan in a novel is 20 pages and half of that is spent in back story, there’s a real problem.

Through the first part of the book, Rice skillfully handled present action with informative, yet mysterious flashbacks.  Apparently she got bored with that, and so the second part of the book dives into the deep end of the flashback pool, written in the form of letters and journal entries by various members of the Talamasca.  For me, this is when things finally started to get good.  The setup with Michael and Rowan was pretty good but was losing steam fast.  With the Talamasca’s file on the Mayfair Witches taking center stage, I was fully immersed in the world of Rice’s creation.  For a time anyway.

As much as I was engrossed by the long, sad history of the Mayfair family (starting with Suzanne, a Scottish lass who unwittingly brings to life the spirit called Lasher), the whole journal entry conceit eventually wore out its welcome.  Usually a literary device like that is a convenient way to more quickly advance the story without going into excruciating detail.  Rice apparently likes her excruciating detail.  By the time I was able to come up for air and rejoin the present, I was more than a little fatigued.

The final part of The Witching Hour is equal parts tense thriller, supernatural erotica, and dull family drama.  The best parts describe the looming showdown between Rowan/Michael and Lasher, a malevolent spirit who is both the servant and master of the Mayfair witches.  But far too often the proceedings are bogged down by unnecessary dialogue and interactions involving the numerous members of the Mayfair clan.

Oh, and I can’t forget the sex.  Rice could have filled two or three chapters solely with all the sex scenes and generally uncalled-for sexual language.  Hey I’m no prude, but I found myself skipping past most of this (OK, some of it was decent).  But really, the book would not have suffered for its omission.

All that said and in spite of the book’s flaws, I did generally enjoy The Witching Hour but by the time it was all over, I felt more accomplished that I made it through than sad that it was over.  I will probably get around to the second book in the trilogy, but I really need a break.

« I come not to bury jazz, but to praise it