“Boys Beware,” or The Courtship of Jimmy Barnes

Before the salad days when children and teenagers could look to trusted role models like MTV and professional athletes for guidance on how to behave, there were educational films. School kids were treated to lectures in the popular “talkie” format that showed them how to conduct themselves in all facets of life.

So after reading, writing and ‘rithmetic, Little Johnny got to learn the do’s and don’ts of important areas such as dating, hygiene, good study habits, avoiding the pervasive influence of filthy Communists and, of course, our pal the atom! In retrospect, most of these films appear rather quaint and benign, if not a bit creepy.

In just ten minutes, this Sid Davis Production managed to simultaneously entertain, confuse, and frighten an entire generation of American children. And quite honestly, it scares the crap out of me too. 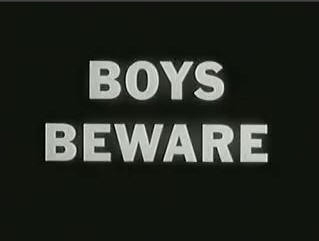 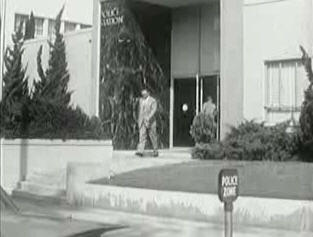 Our cautionary tale begins with our humble narrator and public servant, Lt. Williamson, strolling out of the police station and getting into his car. Why this scene took an entire 30 seconds is unknown. I guess I’ll have to wait for the Special Edition DVD with Director’s Commentary to find out. 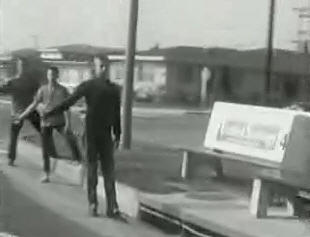 The constable spots a group of young hitchhikers thumbing a ride. I’m not familiar with infrastructure of the late ’50s-early ’60s, but I’m guessing that those benches would indicate that they are hitchhiking at a bus stop. Interesting. Anyway, this affords Lt. Williamson with the opportunity to tell his first tale of woe:

Young Jimmy Barnes was tired from playing baseball (probably an early sign of radiation poisoning), so opted instead to grab a ride from a the first adult who happened by. Seems more logical then hitchhiking at a bus stop, I guess. Enter The Stranger. 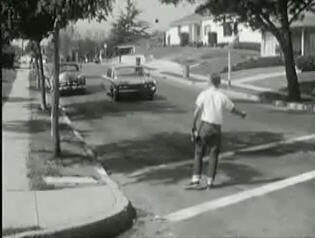 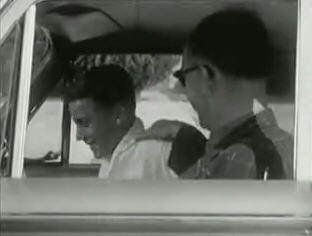 Jimmy makes it home without incident, despite the creepy Stranger’s attempt to apply the Vulcan Neck Pinch. 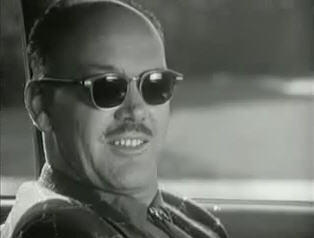 I can see why this guy didn’t set off any alarm bells. Seems legit. 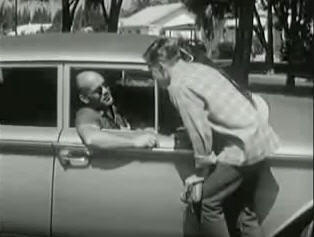 As promised during their previous encounter, The Stranger is there to pick up Jimmy again, though for some reason he is now driving a car with the steering column on the right-hand side.  I knew it, he’s some freaky European.

Whilst enjoying some fine local cuisine, The Stranger tells Jimmy several “off color” jokes. This impromptu Friar’s Club routine somehow segues into a trip to the local fishing hole. It is here that we learn the name of The Stranger — Ralph! I KNEW IT! He just looks like a Ralph, doesn’t he?!

During a break in the fishing action, and while Jimmy is occupied with a sandwich made from leftover taco meat, Ralph (*shudder*) decides to kick things up a notch. Aaaaaaand out comes a stack of nudie photos. According to the narrator, “Jimmy knew he shouldn’t be interested, but well, he was curious.”

See, this is backwards thinking. In a perfect world, all children would be issued a stack of pornographic photos as soon as they hit 12. That way, the Jimmy Barneses of the world would never be susceptible to the seductive charms of the Ralphs of the world.

And it is here that the message of “Boys Beware” is driven home with all the subtlety of a kick to the groin. In the words of Lt. Williamson,

“What Jimmy didn’t know was that Ralph was sick. A sickness that was not visible like smallpox, but no less dangerous and contagious. A sickness of the mind. You see, Ralph was a homosexual, a person who demands an intimate relationship with members of their own sex.”

Go back and read that again, then consider that the above monologue was delivered with an almost Joe Friday-esque sense of placid matter-of-factness. No loud, excited tones, just even-keeled narration. Like he was delivering a traffic report and assumed no one would question him. Not much I can really add here, other than this — this film was shown to children. In the public school system.

Now if this were a horror movie, the audience would be screaming at Jimmy to run away right? But it was too late! The free rides, the tacos, the risqué cards, Ralph’s pornstache — it was simply too much for Jimmy to resist. We see through the use of a montage that Ralph has Jimmy caught in his web of sickness. 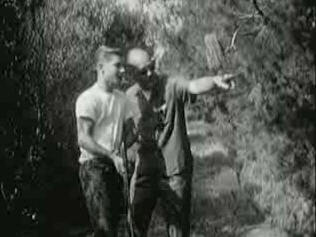 Luckily for Jimmy, he figured out that Ralph was up to no good right after he opened up a gift registry for them at the local NAMBLA gift shop. He tells his parents, who quickly report the incident to the police. Ralph was arrested and Jimmy was released on probation in the custody of his parents. Apparently just consorting with homosexuals was a punishable offense in California back then.

And so ends the first half of “Boys Beware.” All seems well now, but as Lt. Williamson soon warns us:

“But all homosexuals are not passive. Some resort to violence, as in the case of Mike Merritt.”

Crap, you mean there’s another one of those homo-sexuals running rampant?

Oh well, tune in for Part 2 of “Boys Beware” if you dare!