But can it core a apple?

I’m a sucker for a good infomercial. There were times (before I graduated college) when I would literally stay up all night and watch nothing but infomercials. This was in the mid 1990s, or what I refer to as the Golden Age of the Infomercial. Perhaps not coincidentally, the mid 1990s were also the Dark Ages of My Dating Life.I challenge anyone to name five prime time shows of that era that were as consistently entertaining as the infomercials of that era.

The granddaddy of all 1990s infomercials was Amazing Discoveries, hosted by that late, great Mike Levey and featuring his assortment of Amazing Technicolor Sweaters. Amazing Discoveries specialized in products that could typically be found at any mall kiosk, but for twice the price. The “discovery” that stands out most in my mind was for Auri’s line of car care products (wax, polish, etc.). Not for the polish itself, mind you, but for the hyperactive little English guy pitching the product. Tony was his name, and dental hygiene was not his game.

Tony extolled the virtues of Auri with an almost child-like eagerness. He showed me why no car wax was worth a damn if it couldn’t protect your cherished automobile from an eyedropper full of acid. I’m not really sure what audience the acid test was meant to appeal to – research chemists fearful of bitter ex-colleagues?

Levey was the glue that held AD together. His appeal lay not just in his Ã¼ber-dorkness, but in his feigned astonishment at even the shittiest of fad gadgetry. He could watch a demonstration of the most mundane household cleaner and produce a look of wonder on his face, as if someone had just used a ballpoint pen to poke a hole in the very fabric of space and time.

If Levey was the King of the Infomercial, Richard Simmons was the queen. I can’t remember how many hours I wasted watching infomercials for “Sweating to the Oldies” and “Deal-A-Meal.” These shows were unintentional hilarity at its finest. I’ve read enough about Simmons to know that the guy is either completely sincere about everything he does or one of the best scam artists in decades. That being said, I’ll be damned if I didn’t laugh my way through every minute of those maudlin sob-fests. 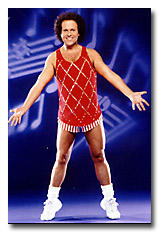 If a half hour with this doesn’t curb your appetite, nothing will.

And for those of you who thought it was funny when he would appear on the Tonight Show or Late Night with David Letterman and get skewered, you ain’t heard nothing if you haven’t heard his old appearances on the Howard Stern radio show. If at all possible, seek out recordings of those appearances. Comedy gold.

Long before gangsta rappers showed us the beauty of bling, Tom Vu, Vietnamese real estate magnate, was livin’ large. Or keepin’ it real. Or whatever the hell they do with their Escalades and their spinners. The guy was a nicer version of Kahn from King of the Hill, with more cash and babes. But believe me, he was no less a cartoon character.

“You not from government are you? No? Then come to my seminaaah!”

I could go on and on about all the other lesser gods of the infomercial pantheon. In fact, I probably will again when I run out of material. 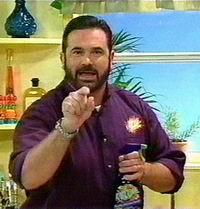 “Buy my crap or I will rip your arms out of the sockets!”

Sadly, my schedule these days simply does not allow me the opportunity to take in modern-day infomercials. But luckily, the Mike Leveys of the 21st century seem to have found their way to TV shown during regular hours. That means even a working stiff like me can bask in the glory of Billy Mays.

6 thoughts on “But can it core a apple?”