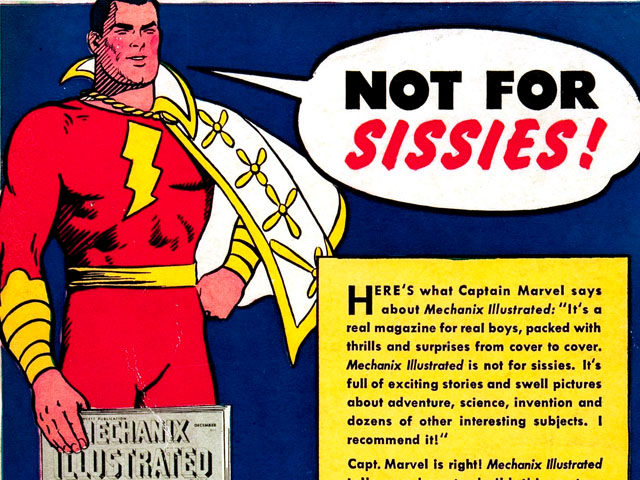 I have to say, as vintage examples of cynical marketing aimed at kids goes, this one is a doozy. It’s an advertisement for Mechanix Illustrated from America’s Greatest Comics #2 (Fawcett Publications, Feb/May 1942), and features none other than Captain Marvel himself.

OK, so let me provide a little bit of historical context here. Mechanix Illustrated, in case you couldn’t tell, was positioned as a competitor to established magazines like Popular Science and Popular Mechanics. It was published by Fawcett, which of course owned Captain Marvel. And lest you think being thought of as a sissy by Captain Marvel wasn’t a big deal in 1942, keep in mind that throughout the ’40s Captain Marvel eclipsed Superman in terms of popularity and comic books sold.

No word on whether or not Shazam himself approved of Commies reading Mechanix Illustrated, but I’ll keep digging.