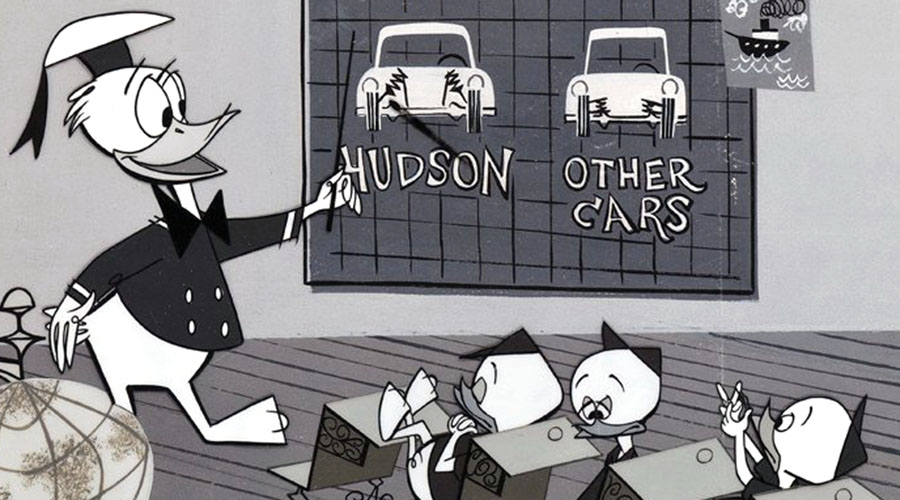 Long before the Walt Disney Company became known not just as a purveyor of magic but as a corporate behemoth, they tried their hand at television advertising. In the early-to-mid 1950s, Disney produced a series of fantastic TV ads featuring classic characters like Mickey Mouse, Donald Duck, and Tinker Bell, as well as original product-specific characters.

This great ad and animation cel come from a spot for what I believe to be the 1955 American Motors Hudson Hornet, and feature Donald Duck and his nephews Huey, Dewey, and Louie. The designer was Tom Oreb, who worked with Disney during what was arguably their golden age for feature productions.

First, let’s look at the Hudson Hornet ad. I’m not 100% certain what model year this is for, as the sources I’ve seen for this animation vary on the date from 1952 to 1955. I’m going with ’55 based on the fact that the ad mentions American Motors, which was formed the year before from a merger between Hudson and Nash-Kelvinator.

And now let’s look at one of the original production cels, which shows Donald and his nephews drawn in a much more modern style than they were usually seen in. Notice the much more angular character design, which was meant to emulate the then-popular Cartoon Modern movement.

Despite only appearing in the first ten seconds of the ad, it’s still a great spot. As is typical for car ads from the era, they go into a ton of detail on a particular safety/comfort feature. In this case, the Hornet’s “deep coil spring” suspension system. Fascinating.

« Let’s Look At Some Vintage Packers vs. Cowboys Game Programs