This post originally ran in November 2005, when the Indianapolis Colts looked poised to unseat the 1972 Miami Dolphins as the only undefeated team in the modern NFL era. They ultimately failed, and so this year the 9-0 Green Bay Packers are next in line for a shot at sports immortality. And wouldn’t you know it, the ’72 Dolphins just can’t shut the hell up. Same crap, different year.

I’d like to take a moment to delve into the world of sports. Last night, the Indianapolis Colts beat the Pittsburgh Steelers to go to 11-0 this season. And just like all the other times a team has gone undefeated this deep into the season, we have to watch the graying, braying remnants of the 1972 Dolphins (who finished 17-0) celebrate whenever the last undefeated team loses.

And I, for one, have had enough. I am hereby declaring myself a Colts fan for the rest of the 2005 season. Or at least for as long as they stay undefeated.

There are probably a number of reasons Colts fans can come up with why this year’s team deserves to finish with an unblemished record, but I only care about one — I want to see the likes of Larry Csonka, Mercury Morris, and Bob Griese cry in their empty champagne glasses.

Seriously, how pathetic is it that a group of professional athletes can take so much glee when another team loses the chance to achieve something as difficult as going undefeated for an entire NFL season? And let’s be honest, if there were ever a more overrated team than the ’72 Dolphins, I’m having a hard time thinking of one. 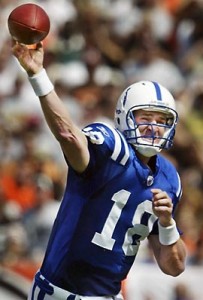 Don’t take my word for it, see for yourself. What the stats tell us is, well, telling.

If they had lost just once during the regular season, the ’72 Miami Dolphins would still rightly be remembered as a very good team that won the game’s ultimate prize. Nothing more, nothing less. But because they somehow managed to win them all (no small feat, admittedly), they are lionized as one of the league’s legendary teams. And the fact is they simply aren’t.

Now, the 2005 Colts probably aren’t the best team ever, but they’re the best team this year. And if they can win eight more times, I will be a very happy sports fan. Even if it means I have to watch a silver-haired Peyton Manning and Marvin Harrison sipping champagne in 2035.