In the Dinner Music series, I present a recipe from a vintage magazine and pair it with some appropriate music. Feel free to make the meal, listen to the tunes, and let me know how it turned out!

For no particular reason, I’m kicking off my new Dinner Music series with a goulash recipe from the June 15, 1953 issue of Life magazine. It’s from an advertisement for Hunt’s Tomato Sauce. For those not familiar with the dish, here’s what Wikipedia has to say about it: “Goulash (Hungarian: gulyás) is a soup or stew of meat, noodles and vegetables (especially potato), seasoned with paprika and other spices. Originating within the historical Hungarian ethnic area, goulash is also a popular meal in Scandinavia and in Central and Southern Europe.” 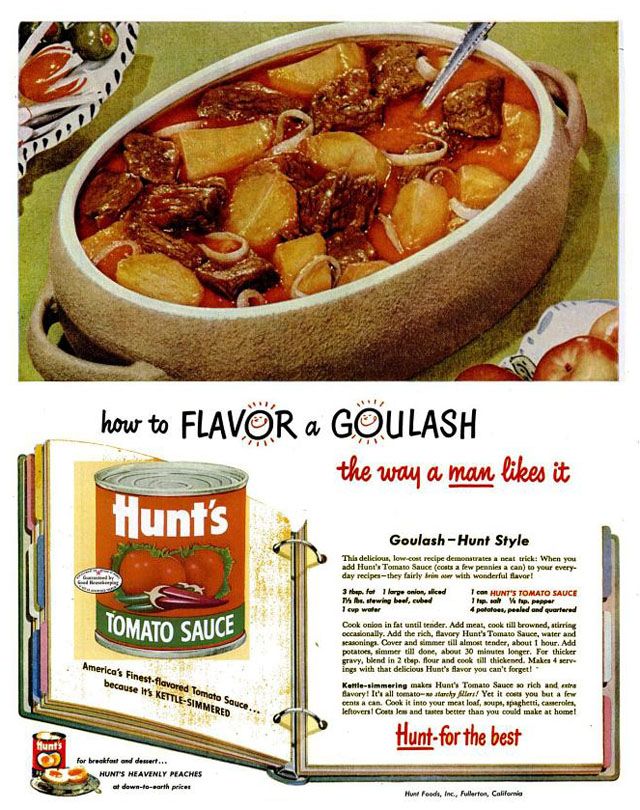 Few people are more synonymous with the rich musical heritage of Hungary than the classical composer Franz Liszt (1811 – 1886). And so for this recipe I’ve chosen one of his meatier (see what I did there?) compositions, one which made its public debut almost a century before this recipe was printed. It’s the four-part Piano Concerto No. 1 in E-flat major. The concerto consists of four movements, which are performed without breaks in between, and lasts approximately 20 minutes. It premiered in Weimar, Germany on February 17, 1855, with Liszt at the piano and Hector Berlioz conducting.

For more great music and recipes, check out the rest of the Dinner Music series. To hear all the music from the series, subscribe to the playlist in Spotify or Rdio.