Look around the NFL and you’ll see that the days of the vintage stadium are nearly over. Of the league’s 32 teams only nine play is stadiums built before the ’90s, while 14 play in buildings opened since the turn of the 21st century. Let’s take a look at those nine older stadiums, shall we?

The home of the Green Bay Packers, Lambeau Field, is the oldest National Football League stadium currently in use. Until 1964 it went by its original name — City Stadium — but it was renamed to honor Curly Lambeau, Packers founder and long-time head coach. Lambeau underwent a renovation from 2001 to 2003, and now has a seating capacity of 73,128.

The stadium is steeped in traditions both old and new. Most famously its playing surface is known as the Frozen Tundra, a nickname earned during the 1967 Ice Bowl. More recently, Packers players who score a touchdown jump into the crowd behind the end zone – a celebration known as the Lambeau Leap.

The Stick was originally constructed for baseball’s San Francisco Giants. The 49ers didn’t move in until the 1971 season, when they left Kezar Stadium behind (the AFL’s Oakland Raiders played their 1961 season in Candlestick). The stadium is perhaps most known for its blustery conditions — due to its proximity to San Francisco Bay, players in Candlestick often have to contend with swirling, gusting winds.

The stadium has seen many notable, non-football events over the years. The Beatles played their last concert there in 1966, and on October 17, 1989 a 7.1-magnitude earthquake caused the World Series to be delayed for ten days. The park’s days are most likely numbered, as the 49ers plan to move into an as-yet-unbuilt stadium in Santa Clara — on the southern end of the Bay — in 2015.

You can forgive Oakland Raiders fans if they suffer from a bit of an identity crisis. Not only did their beloved Raiders call Los Angeles home from 1982-1995, but their current home stadium has undergone a number of name changes.

When it opened in 1966 it was known as Oakland-Alameda County Coliseum, and the Raiders played their until they left the town in 1982. In 1998 the name changed to Network Associates Coliseum, in 2004 to McAfee Coliseum, and from 2008 to 2011 the name reverted back to Oakland-Alameda County Coliseum. Naming rights were awarded to Overstock.com in April 2011, but that was short-lived as the company changed the name yet again to O.co Coliseum fewer than two months later.

A much-maligned 1996 facelift to the stadium provided an additional 10,000 seats, but at the cost of a view of the surrounding Oakland hills. Raiders and Oakland Athletics fans have derisively dubbed this new section Mount Davis, for team owner Al Davis.The future of the Coliseum is in question, as both the Raiders and Athletics have been actively searching for new homes for several years. As of now, no definite plans have been announced.

Home to the San Diego Chargers, this was known simply as San Diego Stadium until 1980, when it was renamed to honor Jack Murphy — the man responsible for bringing both the Chargers and the San Diego Padres to town, as well as for leading the charge for the stadium’s construction. Named for telecom giant Qualcomm since 1997, the stadium has hosted three Super Bowls and hosts two NCAA college football bowl games — the Holiday Bowl and the Poinsettia Bowl. It’s also been the home of the San Diego State Aztecs since it opened. The Padres moved to their own stadium in 2003, while the Chargers have talked about leaving for years. The NFL has already decreed that no more Super Bowls will be held in San Diego until a new stadium is constructed. 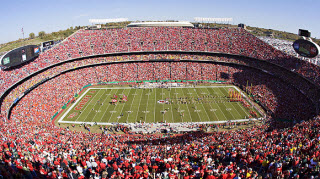 The Kansas City Chiefs are yet another AFC West team playing in an older building. It was developed as part of a two-stadium complex along with Kaufmann Stadium (home to baseball’s Royals) and sported artificial turf until a grass field was installed in 1994.

Additional renovations took place from 2007-2010, and the Chiefs signed a lease around this time that ensures they will remain in Arrowhead until at least 2031. Of historical interested is that the 1974 Pro Bowl was played for the first and last time in Arrowhead. Due to an ice storm and brutally cold temperatures during the week leading up to the game, the players worked out at the facilities of the San Diego Chargers. On game day, the temperature rose to 41 degrees. The Pro Bowl continued to rotate venues until 1980, when it found a permanent location in Honolulu’s Aloha Stadium.

I’m sure it’s just coincidence but of the nine stadiums in this list, five of them are occupied by teams that started in the AFL. Hmmm. Anyway, the building formerly known as Rich Stadium opened in 1973 and has been the home of the Buffalo Bills ever since. War Memorial Stadium was the team’s home prior to then, but after the AFL/NFL merger it was deemed unsuitable for an NFL team. Naming rights were sold to food corporation Rich Products for $1.5 million over 25 years, one of the first deals of its kind. The Ralph has sported artificial turf since its opening, which probably makes sense given its geography. Like Candlestick, this stadium is infamous for its difficult wind conditions — not to mention the fact that Buffalo is susceptible to the occasional blizzard. 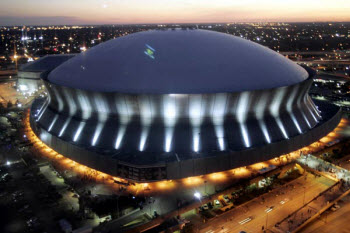 The Superdome is the largest fixed-dome structure in the world, and was built to be bigger and better than the Houston Astrodome. It was supposed to be the site of Super Bowl IX, but construction delays forced the game to be moved to Tulane Stadium.

The New Orleans Saints are the dome’s most well-known tenants, although it was also hosted numerous Super Bowls and NCAA football games, as well as MLB exhibition games. Most recently, the Superdome was closed during the 2005 NFL season as a result of damage suffered during Hurricane Katrina in August of that year.

It’s hard to remember now, but once upon a time the Minnesota Vikings played their home games outside. Like, even in December. In Minnesota. But since 1982 they’ve played in the climate-controlled confines of the Metrodome, along with the Minnesota Twins (until 2009) and the Minnesota Golden Gophers (until 2008). It was constructed for a relatively economical $68 million, two million dollars under budget. Gotta love those thrifty Midwesterners.

The Vikings have been itching to leave the Metrodome but have had trouble finding financial backing from the state for a new venue. Their claims that the stadium is simply inadequate have fallen on deaf ears in political circles, despite the notable failure of the stadium’s roof during a snowstorm in December 2010.

I still remember feeling a bit of sadness when the Miami Dolphins abandoned the historic Orange Bowl for what was then known as Joe Robbie Stadium. An interesting bit of trivia, though, is that it is one of three stadiums remaining to house both teams from the NFL and MLB. The expansion Florida Marlins moved in for the 1993 MLB season.

Due in no small part to being located in South Florida, the stadium has hosted five Super Bowls for an average of one every five years. The most recent was Super Bowl XLI, which was marred by heavy rains.