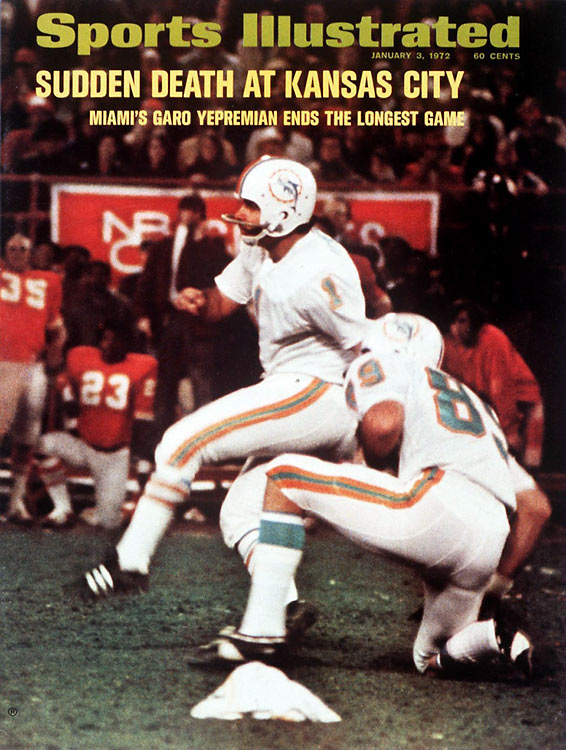 The Miami Dolphins and Kansas City Chiefs entered the 1971 NFL playoffs evenly matched. They both finished the regular season with identical 10-3-1 records and both scored more than 300 points on offense. By virtue of the rotation system then in place in the league, the Chiefs hosted an AFC divisional playoff game on Christmas Day ’71. It was to be the last game at the old Municipal Stadium, and it ended up as the longest game in NFL history.

Miami spent most of the game playing catchup to Kansas City. The Chiefs took an early 10-0 lead before the Dolphins finally answered back with a Larry Csonka TD run in the 2nd quarter. Kansas City scored two more TDs but each time Miami responded with one of their own. Miami tied the score at 24-24 with just 1:25 left in regulation when Marv Fleming hauled in a five-yard pass from Bob Griese.

Finally, about halfway through a second overtime, Miami kicker Garo Yepremian (laces out!) nailed a 37-yard field goal to win the longest game in NFL history — 82 minutes, 40 seconds — and send Miami to the AFC title game against the defending NFL champion Baltimore Colts.

Another record was set on that Christmas day in 1971 — Chiefs running back Ed Podolak racked up an amazing 349 all-purpose yards (8 receptions for 110 yards, 17 carries for 85 yards, 3 kickoff returns for 154 yards). It’s an NFL playoff record that still stands, and is currently the fourth-highest total in any league game.

I couldn’t find any video footage of that game, since the NFL seems to police YouTube pretty vigilantly for it. You can see the NFL Films account, complete with John Facenda narration, here. I did hunt down a few images.

« Separated at birth? (Russell from ‘Up’ and Kim Jong-Un)