It’s instructive to remember from time to time that not everything the National Football League touches turns to gold. Case in point — the World League of American Football. It was formed, with backing from the NFL, fewer than five years after the collapse of the rival USFL.

The WLAF was the NFL’s first organized attempt to spread the game beyond American shores, and as such it featured four franchises outside the United States (London, Barcelona, Frankfurt, and Montreal). It also served as a developmental league of sorts for the NFL, a concept that would be carried over into the WLAF’s successor league.

The first WLAF franchise was awarded to Orlando, which dubbed themselves the Thunder and lives on in football fans’ memories as the owners of one of the ugliest uniforms in sports history.

Bright and ugly! Now that’s quite a feat. 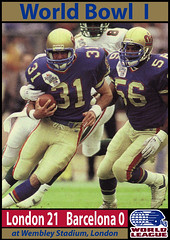 Anyway, the Thunder finished 5-5 in the inaugural season of 1991, a year that saw the league dominated by it’s non-American teams. The London Monarchs finished with a 9-1 record and crushed the New York/New Jersey Knights in the playoffs en route to a 10-3 World Bowl I victory over the Barcelona Dragons.

Some people blame the dominance of the European teams for the WLAF not taking off, but really I think it the league had two bigger factors working against them. One, springtime football just isn’t all that appealing. The NFL is special in part because it plays relatively few games and is almost synonymous with autumn.

That’s not to say the league wasn’t entertaining and didn’t display plenty of good football. But ultimately, the American public decided it just wasn’t good enough. I know I tuned out some time after the first season, and only checked in occasionally later in the ’90s when the league returned as a Europe-only product called the World League (and then NFL Europe).

The idea of a full-time European league died in 2007, when NFL Europa ceased operations. For now at least, the NFL seems content to stage a few NFL contests in Europe each season. All we have now are memories. And the internet, to preserve clips like this one, showing a 1991 week 1 matchup between the Knights and Dragons. Take it away, ABC and Brent Musberger!