And so begins the second part of our exploration of the music of Genesis, now sans the costumes and theatrics of Peter Gabriel. After auditioning some well-known and unknown singers, the group finally decided to let drummer Phil Collins assume the mantle of frontman. It was a risky move, but one that reaped immediate dividends…

Any doubts over Genesis’ ability to function as a viable artistic unit post-Peter Gabriel were quelled with the release of A Trick of the Tail. While nothing on this album is quite as adventurous or weird as their previous work, it is no less satisfying. “Dance on a Volcano” gets things started with a bang, and sounds like it could have been recorded during the Lamb sessions. The song is a showcase especially for Collins’ impressive percussion skills.

Containing just eight songs and running around the 51-minute mark, there are no weak points on this record (although the title cut and “Robbery, Assault and Battery” are less than essential). Surprisingly, the real highlights of Trick are the slower numbers. “Entangled” is a moody and gorgeous acoustic piece concerning illness (and perhaps hypnotism) that fades into a haze of Mellotron, while “Ripples…” boasts a haunting chorus and an inspired “Firth of Fifth”-esque middle section featuring some wonderful interplay between Tony Banks’ piano/synths and Steve Hackett’s guitar.

The second Genesis album of the post-Gabriel era could have been subtitled “The Tony Banks Experience”, as his musical vision seems to dominate the proceedings. He is in fact credited as the sole composer on three of the W&W‘s nine songs, as well as a co-writer on three others. The mini-epic “Eleventh Earl of Mar” is reminiscent of “Watcher of the Skies” in the way it opens the album with a blast of keyboards. This song and the second, “One for the Vine,” are some of the group’s last stabs at traditional progressive rock.

The rest of the album finds the band striking out in new artistic directions, with mixed results. The one-two instrumental punch of “Unquiet Slumbers for the Sleepers…” and “…In That Quiet Earth” are strong, as is the bittersweet “Blood on the Rooftops,” a potent pairing of caustic lyrics (castigating the British for ignoring the perils of the world) and delicate acoustic fretwork by Hackett.

“Wot Gorilla?” and “All in a Mouse’s Night” have their charms but feel forced and hokey by comparison. Of particular note is “Your Own Special Way,” a Mike Rutherford-penned ballad that offered a big clue as to the more commercial-friendly direction the band would eventually take. But not before another lineup change. 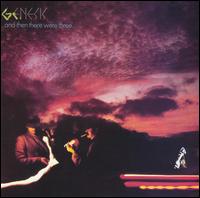 Feeling creatively squeezed by his bandmates and unhappy with having some of his compositions for Wind & Wuthering either relegated to the Spot the Pigeon EP or rejected outright, Steve Hackett left Genesis at the conclusion of the supporting tour for that album. The group forged ahead as a trio for the first time with …And Then There Were Three…, an album that marks the beginning of a new creative era for the group. While they retained some of their progressive tendencies on this record, it is decidedly a more slick and radio-friendly effort.

Despite the album’s FM radio trappings, it is not without merit — strong compositions like “Undertow,” “Down and Out,” (possibly Collins’ finest Genesis moment on the drums) and “Deep in the Motherlode” prove that simpler isn’t always worse. Still, it’s hard to overlook the weakness of tracks like “Ballad of Big” and “Snowbound”, while the top 10 UK single “Follow You, Follow Me” is either one of the best pop songs of the band’s career or a bland abomination (depending on your outlook).

…And Then There Were Three… is undeniably a transitional album, and not a recommended starting point for any Genesis inquirer. However it is absolutely worth a listen, for there are highlights to enjoy. 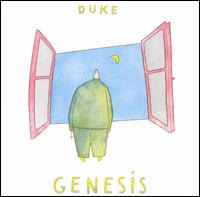 watch “Turn It On Again” (Banks/Collins/Rutherford)
The fragmented songwriting approach the trio of Banks, Collins, and Rutherford used on …And Then There Were Three… was tightened considerably on Duke, and the result is a quantum improvement both in consistency and quality. Quite simply, this album is the zenith of the Collins era and a perfect synthesis of arty/progressive elements and streamlined pop.

Discarding the fanciful storybook lyrics of previous efforts, Genesis infused Duke with themes of failed relationships (informed partially by Collins’ crumbling marriage) and heartache. This, combined with the cleaner and punchier production values, gives the record a powerful sense of intimacy and immediacy. Because of this, songs like “Misunderstanding,” “Alone Tonight,” and “Please Don’t Ask” avoid poppy triteness while still being accessible. And let’s not forget the all-time classic “Turn It On Again.”

The uptempo tracks are also strong here, as evidenced by album opener “Behind the Lines” and closers “Duke’s Travels” and “Duke’s End”, which together help give Duke the feel of a concept album (just one without a narrative). Fans of this album (and the song “Heathaze” in particular) would also do well to seek out “Evidence of Autumn,” originally released as the B-side to “Misunderstanding.”

Inconsistency rears its head once again on Abacab, but the problem here is that instead of mixing up the commercial and edgier/artier tracks as on Duke and even …And Then There Were Three…, Genesis made Abacab too front-loaded. With the exception of the bold, horn-laced pop of “No Reply At All,” the straightforward numbers are clustered together at the end of the record. This makes for a real jarring listening experience. Compounding that problem is the fact that the album-ending trio of “Man on the Corner,” “Like It Or Not,” and “Another Record” are competent but uninspired.

Of the more challenging or arty songs on Abacab, only the abrasive and repetitive “Who Dunnit?” is a real misfire. So eEssentially, the album is carried by the strength of four songs — the opening title track seamlessly blends quirky melody and complexity as it chugs along for 7 minutes; “Me and Sarah Jane” is a punchy and melancholy tune with a rather dreary lyrical theme; “Keep It Dark” points the way to the more humorous songs (and videos) the group would later produce, and sounds inspired by Devo; and “Dodo/Lurker” is the darkest and heaviest song on the album, and ends on an utterly bizarre note as Tony Banks’ synthesizers replicate the sound of an unknown creature conversing with a human. 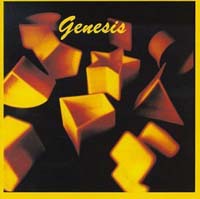 Genesis (known by many as the Mama Album) offers much promise by way of the first song, the dark minimalism of “Mama”, which recalls Collins’ hit solo song “In the Air Tonight” from a few years previous. It’s also the high point of the album, which is the group’s most unabashedly commercial effort yet. Genesis likely alienated a lot of longtime fans in the process (while picking up a lot of new ones), but that’s to be expected any time a band tries to move past its original sound.

The result is a another hit-or-miss affair. The pop/art combo of “Home by the Sea”/”Second Home by the Sea” is actually weighed down by the more abstract (and dated) second number, while the more straightforward first one is the better composition. “Silver Rainbow” runs a close second behind “Mama” for the strongest entry on the album, while the less said about the silly “Illegal Alien” the better. The rest of Genesis ranks no better than decent, which is still pretty good. 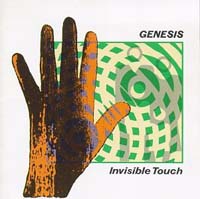 I don’t think it was possible to be alive in the mid-1980s and to not be exposed to at least one track from the commercial juggernaut that is Invisible Touch – seven of its eight songs were released as singles and it sold more than 6 million copies in the U.S. alone. But for the life of me I can’t think of one of them, save “Land of Confusion”, that I need to ever hear again (“The Brazilian” is good but too damn antiseptic.). And hey, how about that awesome video with the puppets?! 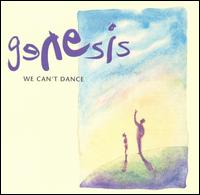 Surprisingly, I’m going to come to this album’s defense. Yes, it suffers from the same running-time bloat that many albums from the Golden Age of Compact Discs do (71 minutes!), but you could trim the fat and still be left with a good album. Take a gander at We Can’t Dance (GFS Edition):

That’s 44 minutes of very good music, enough to fill a full album back in the ’70s. I could do without the ’80s style production and somewhat easy listening vibe of We Can’t Dance — too much of this record sounds like an extension of Collins’ latter-day solo output — but you also have to remember that a group of ultra-successful musicians in their 40s probably won’t have the same fire as hungry upstarts in their 20s.

Phil Collins left Genesis in 1996 so he could to devote more time to producing shitty soundtracks, but rather than call it quits the band opted to move forward with new singer Ray Wilson. They released one album together, Calling All Stations, in 1997. That’s about as much as I want to get into that particular period of Genesis history. Seek the album out if only you are a completist.

Well, that about does it for Get to Know…Genesis. Join me next time when I profile, uh, well I’m not sure yet. But if I enjoy putting together the next piece half as much as I enjoyed this one, then I enjoyed this twice as much.