GFS at the Movies: WALL-E 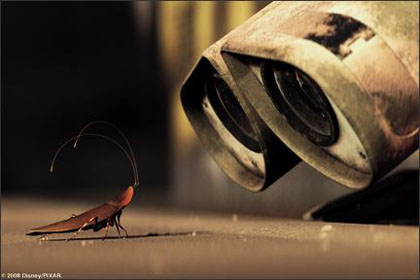 I’ll cop to not being a huge Pixar believer.  I’ve seen Toy Story, The Incredibles, and a few of their other features, but for some reason they’ve always left me a little cold.  Oh sure, they are marvels of computer animation technology, but I have always preferred the old school style.  It’s hard for me to get emotionally invested in movies that look more like extended video game cut scenes.

But I have to say that watching WALL-E got me about as close as I’ve come to getting really engaged with a computer-animated movie.  But not because of the main plot, which concerned a slowly developing romance between the title character (a trash-collecting and compacting robot) and EVE, a nominally female robot who catches WALL-E’s fancy.  While it was cute, it was a tad predictable.

No, what I was really interested in was the secondary plot, which involved the human inhabitants of the Axiom, a gargantuan spaceship housing descendants of Earthlings who have long since abandoned the planet (which at some point became so polluted as to be uninhabitable).  It’s here that the film’s writers successfully stayed on the right side of a very fine line between cautionary science fiction and preachy Hollywood pabulum.

At first sight, the humans of the future are uniformly unappealing – obese, lazy, and oblivious to the world around them.  At first I was sure WALL-E was about to become a thinly veiled attack on consumerism in general, and Americans specifically.  But a good explanation for humanity’s rotund and clueless state was provided, and it worked for me.  That only left the whole “we’re killing the planet” theme, but it wasn’t harped on too much, fortunately.

The story of the humans intersects cleverly with that of WALL-E and EVE when a tiny plant EVE brings back to the Axiom from Earth shifts the story into high gear.  This is the point where I found myself wanting to get to the next scene just to see what happened next.  I won’t give that part away here, but suffice it to say it was satisfying even for a cynic like me.

I’m still not completely sold on CGI movies, but I just may be if I see a few more like WALL-E.  It was smart, visually stunning, and yes, even engaging.  Hell, any movie that gets me to be emotionally invested in a computer-generated cockroach has to be good, right?

A side note – the short Pixar film Presto preceded WALL-E.  It’s a really funny and clever story about a magician and his uncooperative rabbit.  It harkens back to the golden era of Looney Tunes, which is about as high a mark of praise as I can deliver.

6 thoughts on “GFS at the Movies: WALL-E”