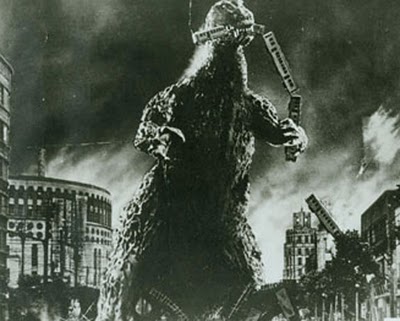 Here’s what I remember about Godzilla — a guy wearing a rubber suit fought another guy wearing a rubber suit, or maybe a fake monster suspended on some wires. There was a lot of really earnest-looking Japanese actors moving their mouths, but instead I heard really melodramatic English voices. In some of the movies, Godzilla was even a good guy of sorts, to the point that little kids were sad to see him go at the end of the film.

I knew all about the subtext for Godzilla, which is that he was some kind of symbol for the anxieties of the Japanese over atomic bombs and radiation. But to me, very little separated Godzilla movies from American-written, period movie monster fare like Them! or The Day of the Triffids. I mean, who hasn’t had a little fun yelling “Gozirraaaa!” while mimicking bad dubbing and imitating a fleeing civilian?

The thing is, however watered down or cheesy the Godzilla franchise may have gotten at some point, the franchise had much darker and more sinister roots. The first film in what was to become a hugely successful series, Gojira (Godzilla), not only holds up quite well as a half-century-old monster movie but is a fascinating glimpse into the psyche of its creators and their country in the middle of the 20th century. Released just nine years Nagasaki and Hiroshima became the first and (to date) only cities to be laid waste by atomic weapons, Gojira features multiple scenes that are essentially recreations of Japanese civilians and cities being wiped out.

The opening scene shows the crew of a fishing boat wiped out by the then-unseen monster in a blinding flash of radiation. Later, as Godzilla stomps through Tokyo in a climactic rampage, a group of panic-stricken civilians attempts to run to safety, only to be cornered and wiped out with one blast from the nuclear-powered behemoth. I can only imagine the visceral power of such a scene when it was first viewed. 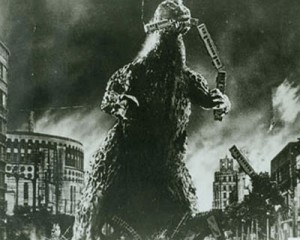 Gojira is like one big therapy session for a nation dealing not only with a horrible event from its recent past, but with their continuing fear that something like it could happen again. The screenwriters pull no punches in their criticism of American nuclear testing and its effects on the planet, but more than anything else the film is infused with the horror of the events of August 1945. To further drive this point home, witness the sequences of beleaguered Japanese civilians being treated for radiation burns and other injuries — they’re almost indistinguishable from pictures taken in and around Nagasaki and Hiroshima.

Context aside, Gojira works on other important levels as well. Visually, I think the film is actually better served by being in black and white. Director Ishirō Honda, editor Kazuji Taira, and cinematographer Masao Tamai made brilliant use of the technology of the time (double exposure, miniatures, models, hand-drawn effects, and forced perspective among others). Godzilla is only seen in portions for the greater part of the film, a slow reveal that culminates with the destruction of Tokyo. That scene, which takes place at night, uses shadow and spotlights to to evoke legitimate dread and terror. When Godzilla is framed in a long shot against the backdrop of Tokyo aflame, it’s powerful stuff indeed.

Oh yeah, and there’s a story too. Gojira is set against a backdrop of, among other things, a romance story. It’s written and acted well enough, and it doesn’t feel totally out of place in the film, but I didn’t walk away from the movie really thinking too much about it. Let’s be honest, people don’t watch this movie to see Momoko Kōchi light up the screen, they watch it to see Godzilla do his thing.

I went into Gojira expecting to see a brainless monster movie set in the same cheeky, fun mold as its countless sequels. Instead I saw a brutal, unsettling psychological thriller that just happened to feature a 150-foot, prehistoric reptile as its antagonist. Sure, some of the special effects are too hokey to overlook (the fighter jets attacking Godzilla are right out of an old Flash Gordon serial), but by and large it’s easy to see why this is the film that launched a cinematic icon for the ages.

Trailer Trash — 13 Assassins, Thor, and Rise of the Planet of the Apes »