The storytelling device of the Nazi hunter in search of German war criminals scattered to the four winds after World War II has been around so long, it’s hard to imagine a time when it was really fresh. And so it must have seemed especially visceral for audiences to watch Orson Welles’ 1946 film noir classic The Stranger, released just 17 days after the first anniversary of V-E Day.

The central plot of The Stranger concerns Mr. Wilson (the ever-brilliant Edward G. Robinson) of the United Nations War Crimes Commission and his hunt for the infamous Nazi war criminal Franz Kindler. Wilson releases a German prisoner and confederate of Kindler, Konrad Meinike (Konstantin Shayne), in the hopes that he will lead him to Kindler. Before long the story shifts to the bucolic New England town of Harper, Connecticut; a place that seems infinitely more appealing to hide than Venezuela. Not that I’d know anything about that. 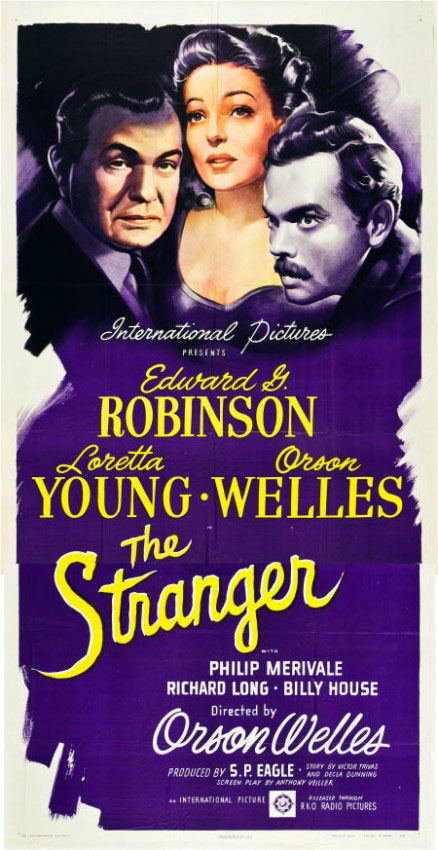 After a near-fatal encounter with Meinike, Wilson happens upon prep school teach Charles Rankin (Welles), who is set to marry the daughter of a Supreme Court justice. Once Wilson’s suspicions about Rankin are aroused, he ever so slowly begins the draw a net around him. That’s about as much as I want to touch on the plot.

While The Stranger is one of Welles’ more successful box office outings, I have to say I wasn’t overly impressed by it. We’re asked to make a few too many leaps in regards to the character of Mary Longstreet Rankin (Loretta Young), Rankin’s increasingly distraught new bride.

I also had trouble swallowing just how easily Mr. Wilson was able to ingratiate himself to just about everyone in Harper within a few days of his arrival. Essentially, Anthony Veiller’s screenplay was just a bit too lazy and convenient for my liking.

That said, there are enough high points in the movie to make it worth seeing. Welles — whose charisma pulses from the screen decades after the fact — has always been one of my favorite actors and he doesn’t let me down here. The choice of Edward G. Robinson as his nemesis was a brilliant one; his breezily sardonic style the perfect counterpoint to Welles’ almost primal masculinity. I also got a kick out of Billy House’s turn as Mr. Potter, the town’s jovial town clerk/drug store owner/busybody.

Behind the camera, there are some flashes of brilliance in Russell Metty’s cinematography, and I enjoyed Bronisław Kaper’s scoring.

There are two scenes in The Stranger that are worthy of further examination. The first takes place during a dinner at Judge Longstreet’s house. When the topic of Germany’s post-war reform is raised, Welles delivers a scathing, thoroughly convincing excoriation of the entire German nation, stating in so many words that nothing short of full extermination — of a kind not unlike the one they practiced in World War II — would silence their warlike nature once and for all.

The second takes place later in the movie, when Wilson confronts Mary with the truth about her new husband. To convince her about the extent of Kindler’s crimes, he shows her film footage of newly liberated concentration camps. I was both surprised and impressed that Welles included actual footage — although he spared us some of the more brutal scenes — of camps in the movie. I wonder how much of Loretta Young’s reaction was real, given that the footage was still so new and raw.

Despite being a bit uneven in places and little ragged in the plot department, The Stranger packs enough punch and boasts enough star power to make it worth seeing.