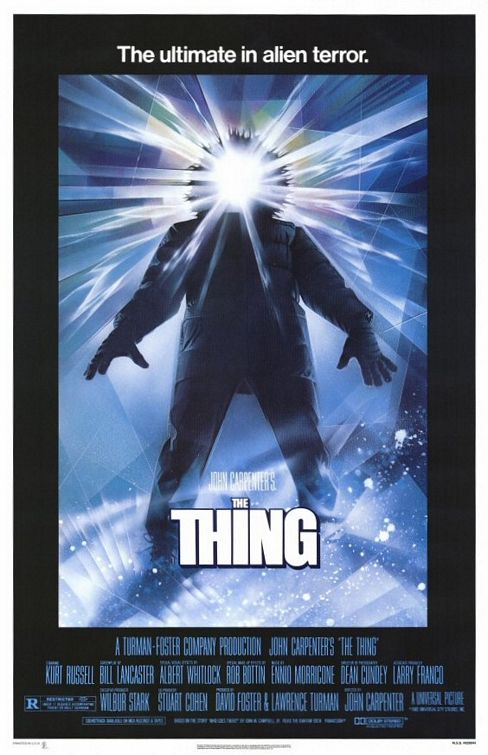 I spent a lot of time as a kid watching horror movies, but somehow never got around to watching John Carpenter’s 1982 classic The Thing. Spurred on by the impending release of the so-called prequel (directed by Matthijs van Heijningen Jr.), I decided to rectify that. Sure enough, it was great.

The Thing works as a straight horror movie in that there are plenty of gruesome deaths and disturbing visual effects, but where it really succeeds is as a psychological thriller. Throughout most of the movie I kept recalling the classic Twilight Zone episode, “The Monsters Are Due on Maple Street.” The premise of the two is the same — a mysterious alien entity has made its presence known and a formerly tight-knit group succumbs to paranoia and the violence it inevitably breeds. The main difference is that in The Thing, the danger is all too real. I imagine Rod Serling would have approved.

In truth, the Thing — a long-frozen parasitic alien discovered by a Norwegian research team in the Antarctic — could have let the humans do its work for it. Once its parasitic/copycat nature was discovered by a member of a nearby American team (Dr. Blair, played by Wilford Brimley), suspicion and doubt quickly turned to fear and hostility. Blair lasted about five minutes before he went batshit, which I suppose is par for the course for Brimley anyway. Of course a rather gruesome reveal scene involving a pack of unfortunate dogs helped egg him on a bit.

The Thing is also helped by some strong performances from Kurt Russell (as the grizzled helicopter pilot R.J. MacReady), Keith David (Childs), and Donald Moffat (Garry). The characters themselves were a bit broadly drawn, but it didn’t really detract too much. The only real issue I had was that once the Thing stepped up its game and started hunting in earnest, the research team fell into the lame old cliché of wandering around their station alone, just waiting to get picked off. It’s one thing for dumb teenagers to do that with a slasher on the loose, but it seemed rather implausible to see intelligent adults serve themselves up for slaughter in the same way.

In terms of visuals — the creature special effects were very nasty, and about as good as you could get in 1982. I’m not sure that the new movie will be able to improve on them too much, even with CGI. Carpenter’s direction was excellent and Dean Cundey’s cinematography most definitely added to the feelings of isolation and impending doom. Ennio Morricone’s score was understated but helped punctuate just as Carpenter’s similarly minimalist music for Halloween did. Last but certainly not least, credit screenwriter Bill Lancaster with a story that for all its flaws was unapologetically bleak and nihilistic. I loved that the ending pulled no punches and also didn’t explicitly tie up all the loose ends.

I suppose it’s possible that the new version of The Thing will find ways to improve upon Carpenter’s film, but it seems unlikely. But even if all it manages is to recreate the same emotions and reactions, it could still be considered a success.

(Ooh look, the trailer for the original movie!)