Gray Flannel Mixtape: The Best of ’09

Before I unleash my awe-inspiring year-end album wrapup, I thought I’d share with you a mixtape featuring ten of my favorite songs from 2009.  The only restriction I’m placing on myself here is that I won’t be double-dipping from any artists, although some could have easily taken up half this list.  And away we go! 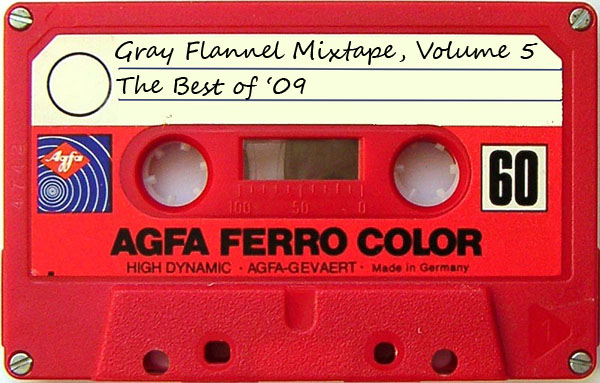 1. “Modern Day Delilah” by Kiss (from Sonic Boom) – This is easily the catchiest tune Kiss has recorded in a long, long time.  It also happens to be the best track on Sonic Boom, which is actually a decent album.  Paul Stanley’s voice is definitely starting to show its age, but he still can bring it at age 57.

2. “A Looking in View” by Alice in Chains (from Black Gives Way to Blue) – Seven minutes of beautiful, brutal music from a band that was away for far too long.

3. “Drethoven” by Jacob Fred Jazz Odyssey (from One Day in Brooklyn) – And taking a total 180-degree turn from the last song, here’s another seven minutes of greatness.  This time it’s some foot-tapping jazz featuring a rhythm that won’t quit and some tasty lap steel guitar.  After hearing this you’ll believe that even in Tulsa they know how to swing.

5. “Compulsion” by Doves (from Kingdom of Rust) – As if Kingdom of Rust wasn’t already one of the best albums of the year, this song lays the funk down more than any trio of British rockers has any right to.  I’ve also included a vocal-less version from the group’s Instrumentals of Rust disc so you can get your groove on with no distractions.

6. “God Is Love” by Eleni Mandell (from Artificial Fire) – Alas, I can’t find any legal ways to link to a copy of this song.  You’ll just have to trust me and seek it out (you can download it from Amazon for just 99 cents).  And for those who don’t dig spiritual songs, this one doesn’t hit you over the head with that despite the title.  It really is just a really beautiful piece of smoky, late-night pop music.  And when that chorus kicks in, it’s oh so sweet.

7. “Channel” by Joe Henry (from Blood from Stars) – Joe Henry’s music has taken on a rather languid, dreamlike quality over the past few albums, and this song is no exception.  But there’s an additional dynamic at play on this cut that elevates it over his already strong material.  Henry truly is one of the most criminally overlooked artists of our day.

8. “Yes I’m Country (And That’s OK)” by Robert Glasper (from Double Booked) – I can’t decide whether or not Glasper’s biggest strength as a pianist is his effortless virtuosity or the beauty he can bring to slower pieces.  So having both of those qualities present in one song is pretty much musical heaven for me.  The song has a Pat Metheny-like compositional quality in parts, which is a nice addition to the Glasper sound.  I also don’t want to overlook the sublime drumming of Chris Dave, who has been a worthy addition to Glasper’s trio in recent years.

10. “Truckers Delight” by Flairs – For those who didn’t want to brave the raunchy YouTube video I posted for this song, now you can listen safely.  This is my most recent musical obsession, and a hell of a way to close out 2009.

2009 – The year in recorded musical performances »