Gray Flannel Mixtape: The mellow side of prog 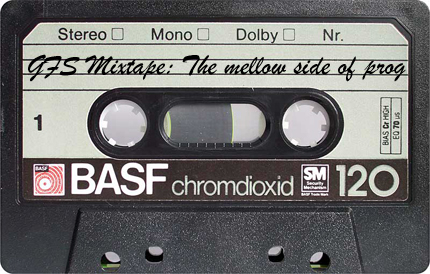 To no one’s surprise, last year’s round of Rock and Roll Hall of Fame inductees included not one progressive rock act.  This despite the millions of albums sold, the countless musicians inspired, and the long-lasting impact of the genre’s best.  Hell, can anyone under 50 even name two Dave Clark Five songs?  Yeah, me neither.

But to be fair, I can understand why someone not very familiar with prog rock might be inclined to write it off as so much boring instrumental wankery and bastardized classical music pastiches.  But to paint an endlessly rich style of music with such a broad brush is not only lazy, it’s downright inaccurate.  So to show that prog ain’t all clinical sweep arpeggios and no heart, I’ve put together a mixtape to showcase the gentler side of the genre.

What we’ve got here is a selection of tunes from some of the giants of progressive rock that are all about mood and melody, not dazzling technique or playing prowess.  Because accessible doesn’t have to mean watered down.

5 thoughts on “Gray Flannel Mixtape: The mellow side of prog”