In celebration of two new CDs from New Amsterdam Records, four of the label’s acts took to the stage last Friday night at Joe’s Pub, located in New York City’s Ã¼ber-artsy NoHo district.  Despite having already heard music from three of them, I still wasn’t sure what to expect from the evening.  After all, classical guitarists and modern chamber groups are not the types of shows I usually see in the Big Apple.

The evening got off to a rather interesting start as, one by one, the three members of opening act Janus took the stage and contributed a few lines to a spoken word loop that comprised the vocal foundation for a piece called “I Am Not (Blank)”.  It was a rather startling way to begin a performance to say the least.  The trio’s style (comprised of viola, harp, and flute) is not for the musically meek, and I’m fairly certain the term avant garde could correctly be applied to the music I heard.  Anything and everything was turned into an instrument for Janus, including bubble wrap and glass bottles. 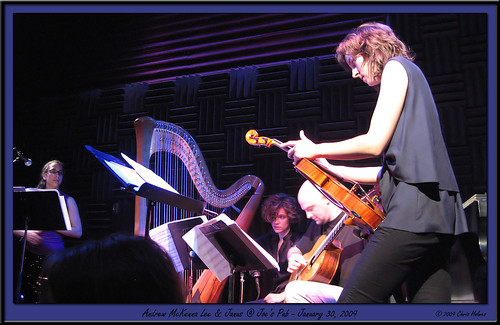 After a few pieces, the trio was joined by the first headliner of the evening’s double bill – classical guitarist and composer Andrew McKenna Lee.  Together they performed “the dark out of the nighttime” from Lee’s Gravity and Air album.  It was a stirring performance of a very intense composition, and sounded even better than on the CD.  Afterward, Lee remained alone on stage to perform almost the entirety of his album, beginning with the title track.

Between songs, Lee’s easygoing nature became evident as he explained the theory and inspiration behind some of his music.  But once he started playing, he displayed an intensity and passion that should have converted any unbelievers in the room.  As he expertly made his way through the first third of his “Scordatura Suite” and the whole of “Five Refractions of a Prelude by Bach” (plus the original “Prelude for Lute in D Minor”), Lee and his guitar created an atmosphere that was both sedate and joyful.

To Lee’s credit, the mood was not even broken by the rumble of the subway underneath the building (or even by one jackass who couldn’t be bothered to turn off their cell phone).  His dedication to his craft became even more apparent as it looked like he was playing the last part of his set with a broken and bleeding fingernail (although it could have been a trick of the light…or the beer).

One intermission later, and it was time for the second half of the evening’s festivities.  First up was Build, one of my favorite new acts of any genre.  The quintet, led by composer/violinist Matt McBane, performed four songs for what was a very receptive crowd.  The short set ended with a raucous and high energy performance of “Magnet”, one of my favorite numbers from their album and now their live set.  As with Lee’s performance, the group really shone in a live setting. 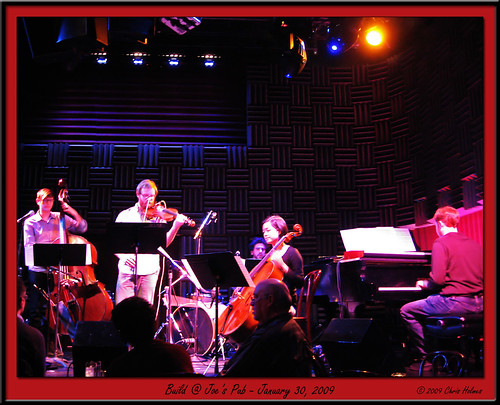 I’ve compared Build favorably in the past to Penguin Cafe Orchestra, but after hearing them live I’m not doing that anymore.  Although I think there are still similarities between the two, Build’s sound is much more muscular and incorporates more rock and jazz influences than Penguin Cafe Orchestra.  But I digress.

Last but not least was QQQ, who performed seven songs in support of their new album Unpacking the Trailer… The quartet boasts a sound that is unique to many American ears, being that the Hardanger fiddle (a Norwegian folk instrument) is its foundation.  As expected, it was played to beautiful effect by Dan Trueman, joined on stage by Monica Mugan (classical guitar), Beth Meyers (also of Janus, on viola), and Jason Treuting (drums and melodica). 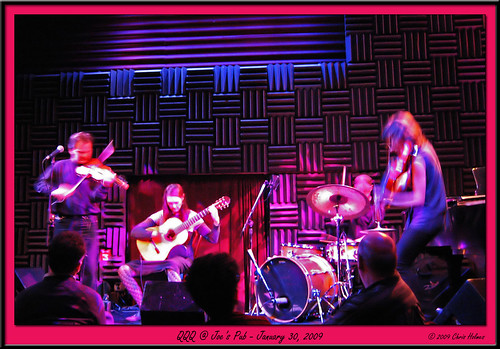 Other than the aforementioned fiddle, QQQ’s real musical strength on CD and live is the diversity of moods they create and the idiosyncratic nature of their arrangements.  For example, the somber tone of “Sister Sparrow” – partly inspired by Paul McCartney’s “Jenny Wren” according to Trueman – was followed up by the upbeat Norwegian folk tune “Beth’s Springar”.

And like labelmate Build, QQQ apparently knows showmanship.  The two bookends of their set – the bluegrass stomp of “Runaway Puppy” and the rocking ebullience of “TÃ¸ykey JÃ¸ykey”, esnured that no one in attendance at Joe’s Pub – including yours truly – went away unsatisfied.  And that reflects well, not just on the acts themselves but on New Amsterdam as well.

« Album cover of the week: At War With the Mystics