In Concert: Queensrÿche at the Nokia Theater 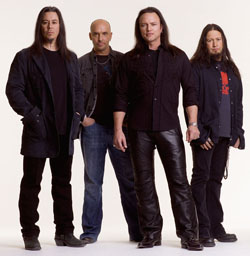 It’s been nearly 10 years since I’ve seen Queensrÿche in concert, and that was for the group’s ill-fated jaunt in support of Hear in the Now Frontier. That tour was canceled after the band’s record label, EMI, went into the crapper. A lot has changed for the group since then, not the least of which was the departure of co-founder and guitarist Chris DeGarmo.

For 2006, Queensrÿche went back to the future and released a sequel to their 1988 magnum opus, Operation: Mindcrime, cleverly titled Operation: Mindcrime II. While not quite the classic the first one was, OM:II was good enough to rekindle my interest in the group. It was that rekindled interest that brought me to see them perform at a sold-out Nokia Theater last Friday night. The theater, I must say, is a very nice venue. I can’t comment too much on the acoustics (I was about 5 feet from the stage), but it looks very nice.

The setup for the night was simple – the ‘Rÿche performed OM:I in its entirety, then an intermission. They came back and played all of OM:II, then did a few encores. With such a long show it’s understandable that there was no opening act, but the problem with doing it that way is it can take a little more time to get into the show. At least that’s how it works for me. What helped was the fact that the band was clearly on top of their game that night. With the exception of bassist Eddie Jackson, who had the stage presence of a mannequin, the band looked into it and interacted nicely with the crowd. Lead singer Geoff Tate may not be able to hit the glass shattering notes like he did in the ’80s, but he still sounded very good and used his voice effectively.

The newest addition to the group, guitarist Mike Stone, is definitely much more rooted in the metal tradition than DeGarmo was, and he brings that sensibility to the group dynamic. But it seems that the crowd was very supportive of him, and that he has been accepted in a way that former guitarist Kelly Gray never really was. Stone mugged for the crowd and delivered some great solos, all with the mandatory “I am passing a kidney stone” facial expressions that are expected of all metal gods.

So how was the music? Damn fine. I would actually say that of the two albums, OM:I suffered more live. This was due mainly to the fact that a large club environment isn’t suited to the grand sound the material needs to work most effectively. OM:II, which was a much drier and intimate-sounding record to begin with, came off really well. Adding to the effect of both were some major theatrics the group has incorporated into the show – set pieces, movie clips and on-stage actors made the whole thing feel like a much harder and cooler version of a Broadway musical.

Oh, and I would be remiss if I didn’t mention the superb performance of Pamela Moore as Sister Mary. She’s a great performer and vocalist, and actually helped fill out the group vocals by hitting ranges Tate no longer can. Sadly, metal god Ronnie James Dio was not present at this show to play the role of Dr. X. Instead, we were treated to a pre-recorded video with some kind of Predator-like infrared image of Dio. Weird.

The night ended with a brief encore set consisting of “Take Hold of the Flame” and “Jet City Woman,” two of my all-time Rÿche favorites. All in all, it was a top-flight performance. I definitely look forward to their next album and tour, which is something I haven’t been able to say in quite some time.

2 thoughts on “In Concert: Queensrÿche at the Nokia Theater”