In Concert: The Week That Was

One of the true bright spots of last year’s bummer of a musical 2008, The Week That Was (the current solo project of Field Music’s Peter Brewis) is in the midst of a brief jaunt across the Pond.  In fact, the show was billed as “Field Music Presents The Week That Was”.  Last night brought them (and a trio of openers) to the rather intimate Mercury Lounge in New York City’s Lower East Side.  It’s the first time a Field Music-related project has hit the States since School of Language was here early last year, so I jumped at the chance to see them. 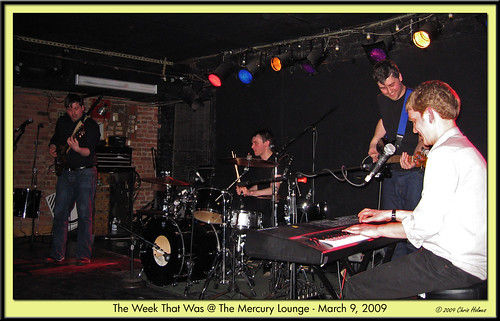 But first, let’s talk opening acts.  There were three of them, although I missed the first one (Monuments).  The second, Philadelphia’s own Arc in Round, put on a decent performance that was unfortunately partly sunk by lousy vocal acoustics.  Most of the songs they performed put me in mind of a typical late-’80s episode of 120 Minutes.  Not bad, but not particularly memorable.

Hallelujah the Hills followed, and the leap in musicianship and compositional skill was amazing.  The six-piece ensemble out of Boston put on very good show, mixing subdued pieces featuring a cello with upbeat pieces that had me and many others in the club moving.  I was impressed enough that I’ve already acquired their most recent album, Collective Psychosis Begone.

While this was going on, observant fans in attendance may have spotted David Brewis standing around inside the venue.  But if they did they sure didn’t act like it.  I can only assume they didn’t recognize him, which I suppose is understandable.  I didn’t want to be one of “those fans” and bother him so I left him alone.  Anyway, on to the show.

The touring version of The Week That Was that took the stage is scaled down from the one on the album – it consists only of Peter Brewis on guitar, keyboard and vocals, David Brewis on drums and vocals, Peter Gofton on bass, marimba (or something similar) and backing vocals, and Kev Dosdale on keyboard, guitar and backing vocals.  (Brewis took over for Dosdale at the keyboard halfway through the set).  Almost more than my eagerness to just hear the band play, I was curious to see how successfully they could replicate the dense, rich textures captured on record.

To their credit, the quartet pulled it off with aplomb.  As I expected, the focus of the show was on the brothers.  Peter (standing a lot shorter than I thought, incidentally) delivered spot-on vocals and excellent work on guitar and keyboards, while brother David stood out with his muscular drumming and beautifully complementary backing vocals.  Gofton and Dosdale acquitted themselves nicely, although the regimented structure of the show – there were just a few moments that really expanded musically on the album – kept them from showing any real chops.

The only real missing ingredient was the string section, and I was able to mentally add them into the mix so it wasn’t a problem.  An unexpected benefit of the pared down lineup was more of a focus on songcraft than production flourishes.  And it turns out that even stripped down to basics, a composition with the name Brewis attached to it is a potent force indeed.  Bring on the next Field Music project!