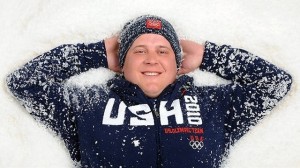 Even if you’re not a huge fan of curling, you’re probably familiar by now with John Shuster’s underwhelming performance as captain of the U.S. team at this year’s Winter Olympics.  Through four matches, Shuster and the boys have zero wins.  But what makes this year’s futility especially painful is Shuster’s propensity for coming up short at crucial moments.  Three matches have been lost because he couldn’t make his final stone count.

Well the mob has spoken and they’re not happy.  In addition to the deluge of anti-Shuster Tweets, the captain’s Wikipedia entry has undergone some creative editing.  Luckily it’s all saved in the article history.  Here are a few choice ones just from today (in addition to the edits that show him as deceased):

Anyway, you get the point.  Look on the bright side John – if nobody cared about curling they wouldn’t bother castigating you like this, right?

By the way, what’s Pete Fenson up to these days?

6 thoughts on “John Shuster, internet darling of the day”