Kathy Griffin Rings in the New Year with Class 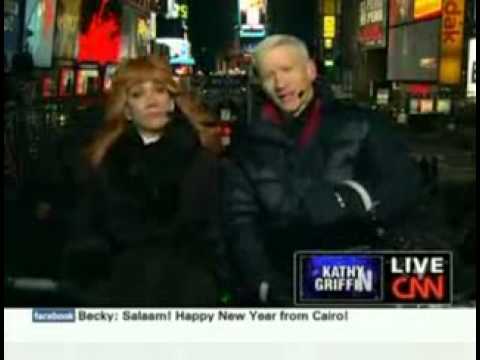 Sometimes there’s something to be said for having little to no social life, and therefore spending New Year’s Eve at home with nothing more than a loved one by your side, some decent champagne to drink, and the glow of TV to entertain you.  Such was the case last night as I and Mrs. Suit were channel hopping to catch various New Year’s celebrations on the boob tube.

Dick Clark, bless his heart, is just too awkward to watch at this point.  I commend him for coming back from a stroke to usher in the new year once again, but when you find yourself waiting eagerly for Ryan Seacrest to come back you know it’s bad.

Over on NBC, Carson Daly put in yet another competent but bland effort.  How the hell is this guy still in show business?  He’s got the personality of cold oatmeal.

The greatest New Year’s Eve celebration, it turns out, was over on CNN.  The festivities were hosted by Anderson Cooper and…Kathy Griffin?!?  Yep, Kathy “no job is too small” Griffin.  In contrast to the rather scripted and stilted productions from the broadcast networks, Anderson and Griffin spent the evening playing rather loose with things and wandering from whatever script there was.

It did actually result in a fairly entertaining show, especially just before 1am Eastern.  Griffin, who had apparently been heckled from the crowd below all night, lost it and fell victim to a producer who must’ve had too much to drink and forgot to cut her mic in time.  As a result we got this TV instant classic:

I don’t know about you, but that’s gotta rank just ahead of the moon landing as the single greatest moment in television history.  In the event the video gets taken down (as well as the dozens of others already up), here’s a transcript:

« 2008 – The Year in Recorded Musical Performances

Scrubs sucked (me in again) »