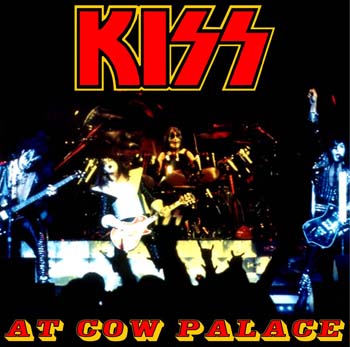 As the Fourth of July approaches, I felt it only right to dedicate an edition of the Booth to one of my favorite all-American bands — Kiss. This show captures the original foursome during a stop on their Love Gun tour, August 16 at the Cow Palace in San Francisco. Fans will note that this setlist is nearly identical to that found on Alive II. A few noticeable differences are the order of the songs and the fact that Peter Criss’s “Hooligan” is in this set. Oh yeah, and this recording wasn’t completely doctored and fabricated.

I’d say that Kiss was still firing on all cylinders at this point, although history tells us that the end wasn’t too far away. Although Alive II continued the band’s hot streak later in 1977, they were just a year away from the commercial fiasco of the four solo albums.

But that was yet to come — Kiss was still on fire for this show (an excellent soundboard recording) and it’s a great testament to the power of the original quartet of Gene Simmons, Paul Stanley, Ace Frehley, and Peter Criss.

One interesting historical note about this show — it took place the same day that Elvis Presley died. Paul Stanley in fact dedicated “Rock and Roll All Nite” to the King.

(These are all in .mp3 format by the way, so lossless format snobs need not bother. I’ve got nothin’ against .FLAC files, except they’re just so damn huge.)