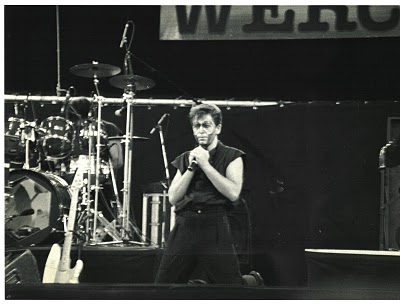 Another day, another listening booth, another great concert for your listening enjoyment. Today I offer up a recording of Peter Gabriel at the seventh annual Rock Werchter festival in Belgium. Gabriel took the stage on July 3 with four solo albums behind him, most recently 1982’s Peter Gabriel (aka Security in America).

Gabriel was already popular in his native Britain after his time as the lead singer of Genesis, but was just now on the verge of stardom in America thanks to the “Shock the Monkey” single. Remember, although everyone loves “Solsbury Hill” now it wasn’t a hit when it was released in 1977.

Gabriel and his band are in excellent form here, and the mixture of songs from the first four LPs is great. We even get a preview of “We Do What We’re Told (Milgram’s 37),” which wasn’t officially released until So in 1986. The set leads off with “Across the River,” which was the B-side of the “I Have the Touch” single from ’82. This is a HIGHLY recommended show for Gabriel fans, casual or hardcore.