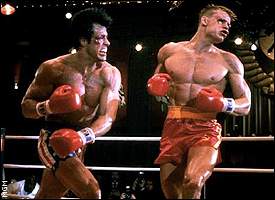 Waaaay back in 2007 I looked back at five flicks that made a big impact on me during my formative years. The next year I ran through four more. And today I drag out another five. Let’s reminisce!

Better Off Dead (1985) — There is not one part of this movie that isn’t 100% awesome, even more than 25 years later. This Savage Steve Holland masterpiece was perfectly cast and written, which makes its more surreal vignettes feel like integral parts of the movie instead of just absurd asides. It never really sunk in when I was a kid that this was a pretty dark film. Hell, the lead character (John Cusack as Lane Meyer) spends most of the it trying to kill himself. Over a breakup. Fortunately he fails and gets to see an Eddie Van Halen-esque hamburger wailing a Frankenstrat to “Everybody Wants Some!!”? Genius.

Cusack reportedly told Holland that Better Off Dead was, “the worst thing I have ever seen. I will never trust you as a director ever again, so don’t speak to me.” I wonder what he said to the guy who directed Martian Child?

Stand By Me (1986) — Hey, more John Cusack! Well, with or without him, is this not one of the greatest movies ever? And fellas, how many of you said to yourself as you watched this, “man, my friends suck compared to these kids”?

Rob Reiner could do no wrong in the ’80s, and it certainly helped that he had great source material to work with here (Stephen King’s short story “The Body”). All I know is that between him and the cast, I was absolutely transported to Castle Rock, Oregon in the summer of 1959. I felt like I was in that clubhouse playing cards and looking at nudie magazines. And I was there when Gordie, Chris, Teddy, and Vern busted their asses to find that dead kid’s body.

I really wish I had skipped out on that last part. Still, great movie and another one I cherish to this day.

Commando (1985) — I probably could’ve recited the entire screenplay for Commando from memory had you asked me back in the day. This was by far the best of Arnold Schwarzenegger’s movies from his brief 1985/86 rough patch (which also saw the dreadful Red Sonja and Raw Deal). Looking back now it all seems rather formulaic, from the corny witticisms to the “lock and load” montage, but it’s still a pleaser. It’s certainly the best film Alyssa Milano’s ever been in that doesn’t involve nudity and/or vampires.

And hey, what’s not to love about the final showdown with a psychotic, steroid-filled Freddie Mercury?

Rocky IV (1985) — I can live in a world where Sylvester Stallone couldn’t stop after the second Rocky film, and I recognize that Rocky IV has pretty much zero artistic or cultural merit. But it’s dumb fun and a pretty neat time capsule of American entertainment during the height of the Ronald Reagan Cold War era.

In it Rocky ditches his smelly, working-class Philadelphia roots and embraces the trappings of fame and wealth (which apparently include letting your deadbeat uncle move into your mansion and buying a robot programmed to stalk men). Oh and then he embodies all that is good and decent about America as he travels across the globe to get oiled up pummel an evil Soviet boxer, who is actually played by a Swedish guy. And when they punch it sounds like a lead pipe hitting a side of beef.

Real Genius (1985) — I sure did watch a lot of movies in 1985, eh? Even more than Revenge of the Nerds, Real Genius made me wish I was a lot smarter when I was younger. Unfortunately I couldn’t even hack calculus and so I never got to go to a college where moving a car inside a dorm room and filling a hallway with skating ice were considered feasible student pranks.

That said, it’s probably for the best that no one saw how I spent Saturday nights in my dorm. I can guarantee you it didn’t involve hanging out with Val Kilmer and planting microphones into someone’s braces.

"MOVIES FROM MY YOUTH"