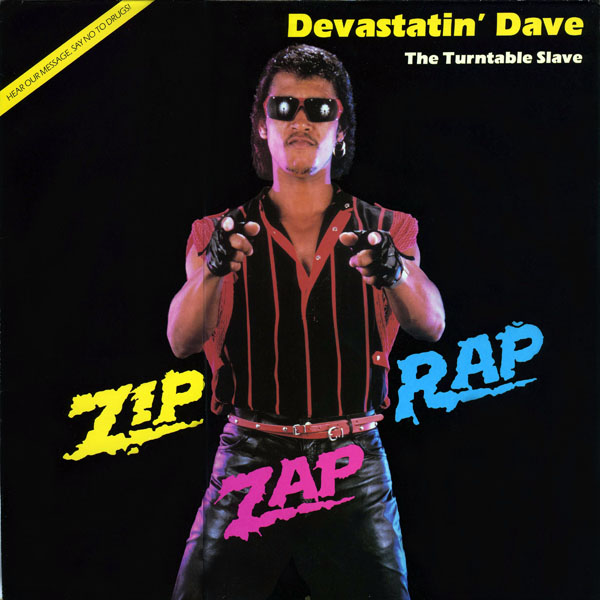 We’ve all seen at least one article showing the worst album covers of all-time. But what about the music? Should you judge an album by its horrible cover? Well in this series, we’re going to find out. Today we examine “Zip Zap Rap” by Devastatin’ Dave (The Turntable Slave).

Precious little is documented about the artist known to us only as Devastatin’ Dave (The Turntable Slave). His sole legacy on earth — according to the internet anyway — seems to be a lone release, the “Zip Zap Rap” vinyl single. It was released in 1986 on the Superstar International Records label, a short-lived imprint out of California whose biggest artist was Scherrie Payne of the Supremes.

The single cover and center rings offer little help in uncovering the identity of the man behind the bitchin’ red-rimmed sunglasses. Songwriting for “Zip Zap Rap” is credited to a D. Cary (who I believe to be Dave Cary, the man himself) and Wayne Henderson. Henderson also received a production credit. Now the name Wayne Henderson rings a huge bell for me, as that’s the name of the trombonist/producer who co-founded the Jazz Crusaders — one of my favorite groups — in 1961.

Whoever Dave is, or wherever he came from, he’s here on this record to just one thing. Rap about the dangers of cocaine and inspire you to stay in school.

Oh yeah, about that rap. Here it is. WARNING: This probably sounds better if you are actually using cocaine, but I do not condone such activities. But seriously, this song blows.

In case you want to follow along with Dave, here are the lyrics. You’re welcome.

Rip dibby zap, da zip dap du wap,
This is what I call the Zip Zap Rap
Hi chi chi cha be back in a sec
Zippy zippa zappa gonna spend your whole check
Zip dip zap, a zip wit a wabbit
Zippy dippa wippa got a cocaine habit
Scooby dooby bop a zip bop blam
It started with a quarter now it is a gram
Zoom zoom with a scooby doo bop
Buy yourself into projects you’re tryin’ to cop
Rip and a rap I wrote with a rhyme
I think you better call the cocaine hotline
Zip dippa wip, you call them on the phone
A zippa dippa wip but yo habit ain’t gone
It’s been flip flop days and you haven’t ate
I could see it in your face you were losin weight
Rip rap rop smoking back to back
Zippa dip wip and you had a heart attack
From playin’ baseball like Willie Mays
Had you in that hospital for thirty days
Flip flop flam but now you’re back
A zippa dippa wip in your new Cadillac
Hah, chichicha, like chokin’ on a bone
Zippa dippa zap you better leave them drugs alone
KIDS RAP!

Don’t be a fool!
Stay in school!
Don’t get high and drive a car
You will not get very far

‘Cause in a flash boom bam you’ll be up on a pole
You got thirty people pushing but it still won’t roll
And it won’t start either ’cause the engine is bent
Next month you’ll be crying ’bout the money you spent
Kids against drugs now say it!

Don’t be a dope!
Don’t smoke that coke!
We’re talkin’ ’bout cocaine
It’s not good for your brain

Zoom zoom boom a zip goes your brain,
You know its only ’cause you’ve been smokin’ cocaine
Ta ta ta ta ta ta ta ta ta ta ta talent
Everybody has it so use it gallant…ly
Maybe you’ll get over you will see
That what I’m saying is really real
Like at the swap meet
A serious deal…that could change the course of your life
It’s a lifetime contract
Read it with caution
Check out the small print
You’ve got three options
The first one is to get your money
At the ‘spense of someone else’s grief
And you know that all that means good buddy
Is that you’re a thief
The second option is a 9 to 5
And 5 to 1 or the 1 to 9
But if you read closely
You’ll see you’ll be there for a long time
The third one is to go for it
And try to get the crop of the cream
When you get tired of drivin’
You just hop in your limousine
Ha, and roll on

Don’t be no fool!
Drugs ain’t cool!
For me or you
You know that this is true

Hard times, y’all are getting harder
Cash money is the only solution
You gotta get hip to the system trip
Become a soldier in the proper revolution
Do it now baby, ’cause when you drop the bomb
There won’t be nowhere for you to run
Try to spend you last cash then you see a big flash and it’s
5 4 3 2 1

The B-side of the single is an instrumental version of “Zip Zap Rap,” which I haven’t heard but doesn’t seem nearly as fun. Sure you don’t get the hideously amateur rapping, but you also lose much of the comedic value. Does anybody remember laughter???