It seems like a totally foreign concept now, but there was a time when bands managed to tour and release albums on a regular basis. An album per year was standard for most acts, and some overachievers managed two per year. Now fans are lucky to get a new record every three years or so. I don’t know how this started or why, but it sucks. I’d rather get a new release every year, with eight or nine songs, than these 14 or 15-song monstrosities that come out whenever a band gets around to it.

Anyway, we’re knee-deep in my journey through R.E.M.’s discography in case you hadn’t noticed. They kept up an old-school release schedule throughout the 1980s, with a new studio recording every year from 1982 through 1988. Pretty damn impressive if you ask me. We’re up to LP number three right now, Fables of the Reconstruction.

While the music on Fables is uniformly strong, I was not surprised to read that the recording sessions were rife with tension. It informs the album, and even the more uptempo songs like “Driver 8” are at least partially shrouded in darkness.

But there’s something else at work here than just everyday studio angst. This is the sound of a band starting to explore the boundaries of their songwriting and arranging.  Album opener “Feeling Gravitys Pull” adds an element of menace heretofore unknown with the band. Peter Buck’s ringing, minor key guitar parts sound nothing like on previous releases, and only during the brief choruses do the clouds part on this rather gloomy number.

Two other things stick out to me about this album. The first is that this is by all accounts a folk rock album, but what makes it an excellent one is that it’s infused by R.E.M.’s garage rock roots. That’s a good thing, as most folk rock sucks and is boring. A song like “Driver 8” works precisely because it’s a folk song arranged like an uptempo rock song. This added folk dimension adds a new richness to the band’s sound, and for that at least some credit must go to producer Joe Boyd, who made his name working with folk legends like Fairport Convention and Nick Drake.

The second thing is that, as mentioned before, there is a level of sophistication and artistic growth on this album that had previously only been hinted at. A perfect example of this is the lead single, “Can’t Get There From Here,” a tense New Wave throwback featuring bold, pleasing chord changes and a horn section. Then there’s “Old Man Kensey,” with its punchy Mike Mills bass line and Bill Berry’s dark, pounding drums. How can you not love a lyric like, “Old Man Kensey wants to be a sign painter / first he’s got to learn to read”? And finally, album closer “Wendell Gee” is just straight country, and provides a pleasant coda for the album.

Of course there are plenty of touchpoints for fans of the more typical, traditional R.E.M. jangle pop/rock style — tracks like “Green Grow the Rushes”, “Maps and Legends”, and “Kohoutek,” however, now sound almost quaint in comparison. 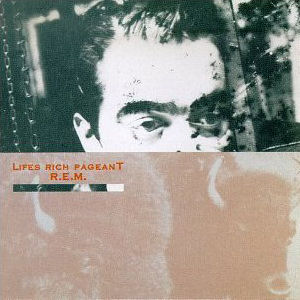 Almost immediately R.E.M. began to distance themselves from Fables of the Reconstruction, and Lifes Rich Pageant is a clear sign of that. The band enlisted producer Don Gehman, who produced John Cougar Mellencamp’s most successful works. The album was in fact recorded at Mellencamp’s Belmont Mall Studios in Indiana.

The influence is unmistakable. “Begin the Begin” is straightforward and loud, and sets the stage for a very confident and rocking record. That confidence is especially evident from Michael Stipe, who sings with a newfound forcefulness and vigor. My takeaway on Lifes Rich Pageant is that this sounds to me like the album where R.E.M. stopped being “college rock,” whatever that even means, and in fact didn’t sound all that alternative. I can’t be the only one who thinks that way, as this was the first new R.E.M. record to earn Gold status. For a few reasons why, witness assured rockers like “Hyena” and “I Believe.” Hell, even Bill Berry’s drumming made me take notice here.

The richer sonic textures the band began to explore are still present, however, as heard on the excellent choral counterpoint vocals of “Fall on Me” the acoustic, quasi-martial “Swan Swan H,” and the exotic melodies of  “Underneath the Bunker.” Oh and I can’t forget “Superman,” a cover of the original by The Clique, and featuring Mike Mills on lead vocals. But experimentation and nuance take a back seat here to big, palate-cleansing rock on Lifes Rich Pageant, which sounds like an album R.E.M. had to make in order to keep going. I don’t know how often I’ll come back to this one, however, despite its consistency and strength.

Favorite songs: “These Days”, “Fall on Me”, “Underneath the Bunker”, “Just a Touch”