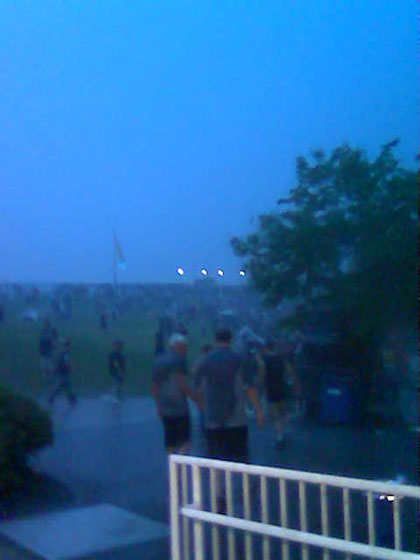 Growing up in the ’80s, my musical universe basically consisted of three bands – Kiss, Iron Maiden, and everyone else (Rush became the third member of the holy trinity of music closer to high school, but that’s another topic). Sadly, somehow I never made it to see either band during their accepted prime periods (I was way too young to have seen mid-’70s Kiss and just barely too young to have caught mid-’80s Maiden).

In the case of Kiss, that was rectified when I caught them twice during their much-ballyhooed (and first) reunion tour in 1996. And now, just about 25 years after I became a fan, I finally witnessed an Iron Maiden concert on Saturday night at the PNC Bank Arts Center. I use the word “witnessed” because this wasn’t just a matter of a band playing music in front of a crowd. This was nothing short of pure synergism between performer and audience. Basically it was beautiful, man (but in a totally metal way, of course).

Before I forget, I must make mention of the rain. Because there was rain. LOTS of rain. And yours truly was in it, the whole damn time.

These are from my camera phone about 20 minutes before the show, as I huddled with my friends under a concession stand roof (notice, if you will, the people standing on top of the tables and under the umbrellas in the 2nd pic). It was like this pretty much the whole night. Oh yeah, and lots of lightning too. But you know what? I waited too damn long to finally see Maiden to let some precipitation ruin this night.

Happily for me (and I feel confident speaking for everyone else in attendance), they did not disappoint. After a brief opening video montage (showing the band jetting around the world in a jet captained by none other than Bruce Dickinson himself), the famous words of Winston Churchill’s rousing June 1940 speech played. Fans know that means only one thing – the classic set opener, “Aces High”, followed.

From there it was staple after staple, classic after classic; all played with so much energy and skill that you’d swear it was still 1988 (only a few receding band hairlines broke that illusion). Leading the charge was Dickinson, whose voice sounds as good as it has in many years. He was animated the whole evening and his in-between song banter was as cheeky as always. And of course he added a dash of theatrics to the proceedings, employing song-appropriate wardrobe for select numbers – a 19th century British army tunic for “The Trooper” and the somewhat cheesy feather mask for “Powerslave” are a few examples.

Speaking of theatrics, the set was quite impressive as well, done up in the Egyptian motif used during the Powerslave era. The revival of that stage was made complete toward the end when a giant Eddie sarcophagus head split open to reveal an even bigger Eddie mummy, which of course shot streams of sparks from its eyes (just like the old days). The only deviation from the look was a giant scrolling fabric backdrop that changed to indicate the albums touched on for the show. And the best of all – an eight-foot tall Eddie (from the Somewhere in Time era) strode on stage and lumbered around for awhile. Folks, it doesn’t get much more metal than that.

But back to the music – in addition to Dickinson, the rest of the band was also keyed in – the triple guitar attack of Dave Murray, Adrian Smith, and Janick Gers was on fire all night, although Murray and Smith of course got the lion’s share of solos. Nicko McBrain was solid behind the drums as always, and what can I say about bass legend Steve Harris that hasn’t been said already?

Greatest hits jaunts like Maiden’s current Somewhere Back in Time World Tour are either cynical cash grabs or a great opportunity for a band and its fans to say “thank you” to each other and bask in some past glories. It all depends on your perspective I guess. But regardless of Iron Maiden’s motivation, I got every penny’s worth and then some. The best part was that even though the concert was all about celebrating the past, the band is still so great that I didn’t have to pretend or mentally fudge over any ugly realities as fans so often have to do for older groups.

encore
“Moonchild”
“The Clairvoyant”
“Hallowed Be Thy Name”

"no storm or heavy weather"