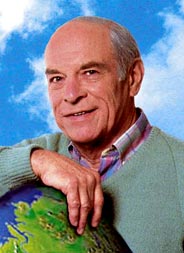 Remember that scene in Star Wars when Obi-Wan Kenobi almost faints after the Alderaan gets blown up by the Death Star? He wasn’t even there, but knew on an instinctual level that something terrible had happened. That’s how I felt when I learned of the death of beloved childhood icon and all-around neat guy Don Herbert, better known to you and me as Mr. Wizard. He had many shows throughout his long life, but only one matters to me.

It goes without saying that for many of my generation – at least the ones with cable – Mr. Wizard’s World was a genuine institution. Through it not only did I learn what a moldy orange looked like when magnified 20 times, but also how I could use everyday household items to blow stuff up. He introduced us to the wonders of the COMPUTER (which I think was an old Apple II or something). And of course there was the potato clock, although I don’t remember if I ever got mine to work.

Through the years Mr. Wizard has been imitated (Bill Nye the Science Guy, Beakman’s World) but never duplicated. His show had all the ingredients of greatness – Herbert’s calm demeanor, cool experiments, snazzy ’80s graphics, and a core group of dorky, slack-jawed Canadian kids. Mr. Wizard never played the role of buffoon for the sake of entertainment, and he never played down to his audience. If he lived in your neighborhood you know you’d totally be over at his place all the time (in that sense, he was sort of like Doc Brown from Back to the Future without the unpredictable mood swings). If Bill Nye lived in your neighborhood you’d egg his house and let the air out of his tires.