Pictures at an Exhibition – State Theatre in New Brunswick, 5/19/06 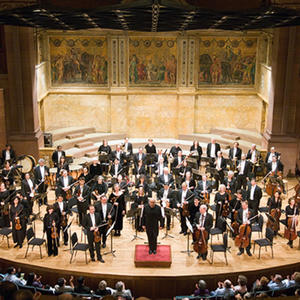 I’m pretty much a dummy when it comes to classical music. I couldn’t tell a Beethoven movement from a Mozart symphony if you held a gun to my head. To be perfectly honest, a lot of the classical music I’ve heard has a certain sameness to it. But there are a handful of pieces that I do enjoy, and one of them is Modest Mussorgsky’s “Pictures at an Exhibition.” And that piece was what brought me to the State Theatre in New Brunswick, to watch a performance by the New Jersey Symphony Orchestra.

First, a little background – like many prog rock devotees, I was introduced to “Pictures” through the fantastic 1972 adaptation by Emerson, Lake & Palmer. It was as a result of that album that I have purchased approximately half a dozen different classic recordings of the piece. It has a dramatic and dynamic quality that I can appreciate very much. So when I saw that it was being performed locally, I jumped at the opportunity.

This performance was directed by Neeme Järvi, who actually was quite the showman. He was bopping around and cracked jokes during the performance, but more importantly he conducted a brilliant performance. Having never seen a live symphony, I can’t compare the NJSO against anything else, but I sure didn’t hear anything wrong with them. The string section, in particular, was tremendous. I still got chills during certain passages (particularly Baba Yaga, my favorite), despite having heard the piece at least at least a hundred times. My wife felt the same, which was nice to hear, since I wasn’t sure if she’d enjoy it.

All in all, I was impressed by the performance, and thought that the State Theater was a very good facility in which to see it. Since I’m not likely to see ELP perform “Pictures” anytime soon, I will eagerly await the next performance by the NJSO or another top-flight symphonic group.