For my latest car advertisement capsule, I’ve gathered marketing material for the full line of new 1970 Dodge cars, wagons, vans, and trucks. You’ll see vintage print and TV ads for the Dart, Coronet, Polara, Monaco, Charger, Challenger, Super Bee, and more. If you like these great vintage advertisements, you could be Dodge Material!

The fourth-generation Dart was refreshed somewhat for 1970 and was available in three main trims. There was the basic four-door sedan, the two- and four-door Custom, and the two-door Swinger (available in base or 340 performance models). Owners of the Swinger 340, as well as other Dodge performance models, were invited to join the Dodge Scat Pack Club. For just $3 per year, members received a newsletter, a free performance parts catalog, and “Scat Packages” featuring performance Mopar parts. 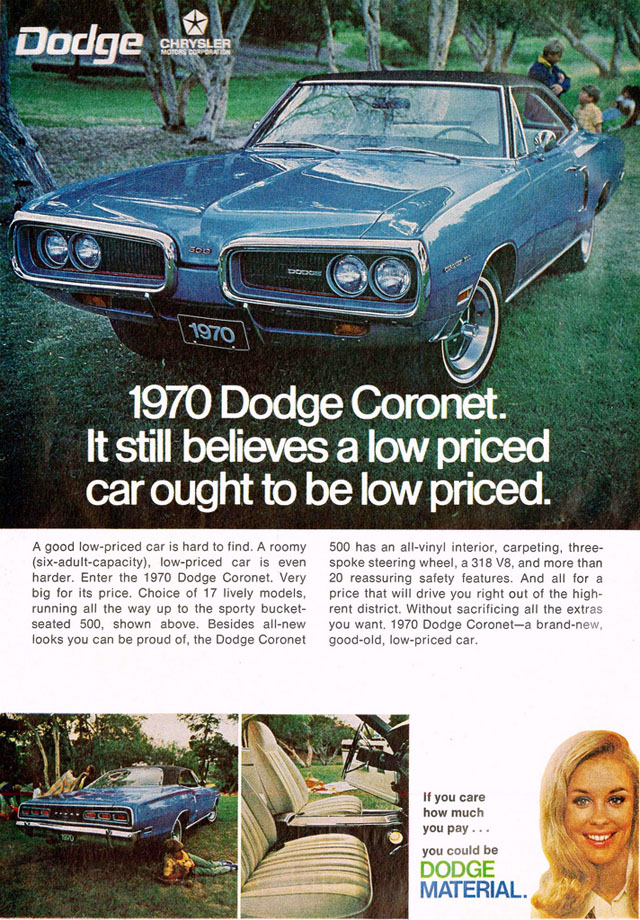 The Dodge Monaco for 1970 was the maker’s other full-size auto, and was marketed as a luxury car. It was available in the same styles as the Polara, minus the convertible. 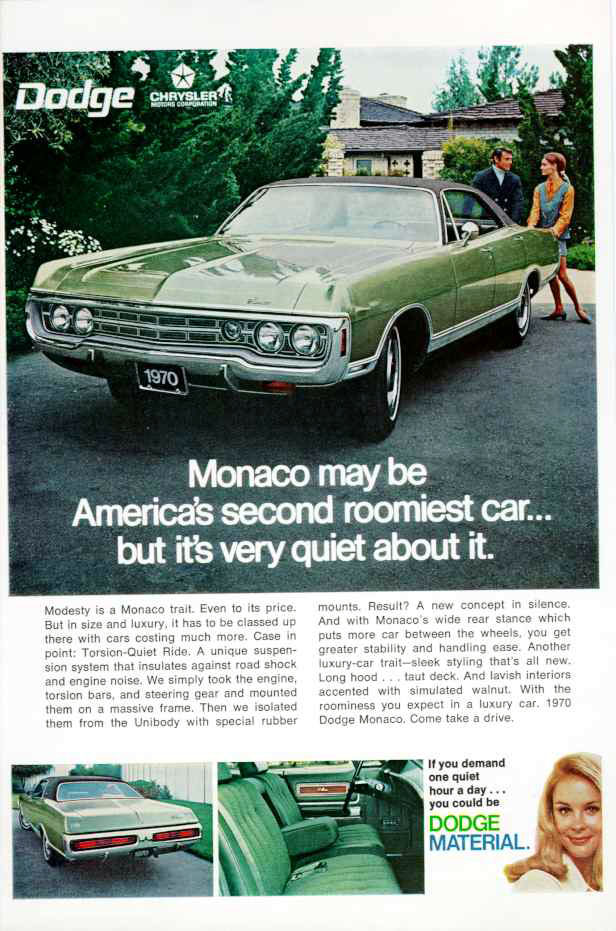 The second-generation Charger was in its third year of production in 1970. It was available in four trims — the base model, 500, R/T, and SE. Some Dodge promotional materials made reference to a race-ready Charger Daytona, which was built in 1969 but eventually scuttled for 1970 in favor of the Plymouth Superbird. Sales of the Charger plummeted in ’70 thanks in large part to the introduction of the Challenger.

The brand-new Challenger (a sister car to the Plymouth Barracuda) was designed to compete against pony cars like the Camaro, Mustang, and Firebird, and was available in six styles, all two-door — the base hardtop, R/T hardtop, SE hardtop, convertible, R/T SE hardtop, and R/T convertible. 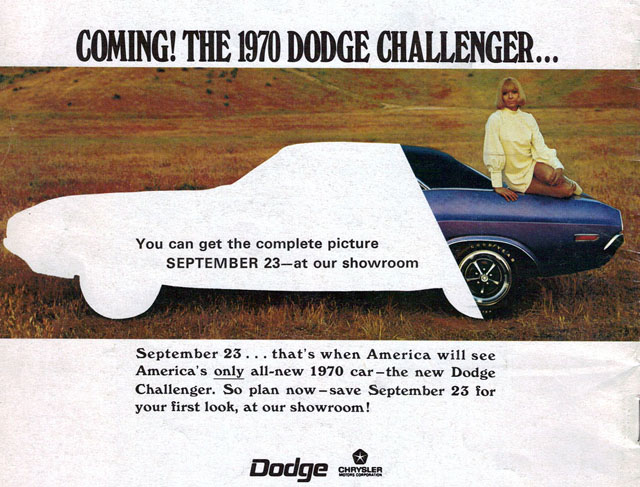 The Coronet-based Super Bee was in its third year of production in 1970, and was positioned as Dodge’s affordable sports car. Production was halved from nearly 30,000 units in 1969 to 15,506. The Super Bee was discontinued after the 1971 model year.

Not a whole lot to say here. Dodge had trucks, vans, station wagons, and even motor homes in 1970. You had the Sportsman and Tradesman vans, as well as the Adventurer and Sweptline trucks. There was also a limited edition Dude Sport Trim Package truck available.

One thing I did find curious was Dodge’s choice of spokesman for their truck line — Don Knotts.

(Most print ads sourced from Flickr, Old Car Advertisements, and the 1970 Hamtramck Registry.)