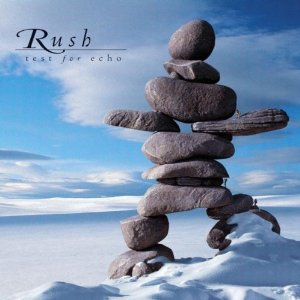 Now that you’ve had a week to digest the first installment of my countdown of the greatest-ever Rush albums, which shook the World Wide Interweb to its very core, it’s time to continue! But first, a quick recap:

All caught up? Good.

I guess when you get down to it, ’90s Rush just doesn’t do it for me (with one exception). Right around the time of Test for Echo‘s release, Neil Peart had implemented a change in drumming style that Geddy Lee and Alex Lifeson claimed brought a freshness to their musical approach. I don’t hear it. A lot of this record just sounds plodding to me, which is really hurts otherwise good songs like “Driven,” “Limbo,” and “Time and Motion.” One exception to this is “Totem,” which grooves along quite nicely.

This album, like most latter-day Rush discs, has its share of filler (“The Color of Right” is the obvious offender here). But that’s not what really sinks T4E – what does that is the worst collection of lyrics to come from Neil Peart. “Virtuality,” which is musically interesting, is the worst of the lot – “Net boy, girl/send your impulse ’round the world/put your message in a modem/and throw it in the cybersea.” Beyond lame. “Dog Years” and “Half the World” are little better, full of bad clichés and platitudes. Oddly enough, the standout track for me is “Resist.” The lyrical device is rather simplistic, but I think it works. It’s the only song on the album that has any kind of emotional resonance for me, whereas the rest of Test for Echo leaves me as cold as the snowy scene on the cover. 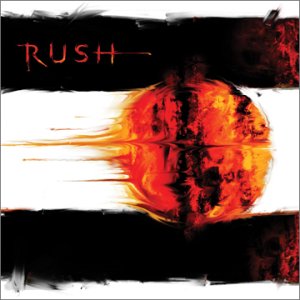 Part of the initial excitement I felt over the release of Vapor Trails was due to the fact that it came out at all. I can’t have been the only Rush fan who thought the band might not make it following the tragic deaths of Neil Peart’s daughter and wife in 1997/8. On first listen, I felt Vapor Trails to be a welcome relief from the tired and bloated Test for Echo. Over time I still feel the same way, but the album has nonetheless fallen in my regard. The main problem is with the infamously botched production – due to a mixture of careless recording and mastering, listening to the record in its entirety is a sonic assault on the ears (and not the good kind).

The second problem is the running length – this album is way too long, by about 15 minutes at least. Most of the middle of the record – “How It Is,” “Vapor Trail,” “Earthshine,” and “Sweet Miracle” could all be pitched and the album wouldn’t suffer in the least.

What keeps this album ranked as high as it is are some very strong tracks – “One Little Victory” is the fiercest song to open a Rush album since “Bastille Day.” “Ceiling Unlimited” could’ve been ruined on Test for Echo, but instead benefits from a tight arrangement and the return of Geddy Lee singing in a higher register. “Peaceable Kingdom” is another gem, but for me the true highlights are “Secret Touch” and “Freeze.” “Secret Touch” kicks ass on many levels, while “Freeze” makes a fine fourth addition to the Fear “trilogy.” But the great moments on this album are weighed down too much for this to rank much higher. 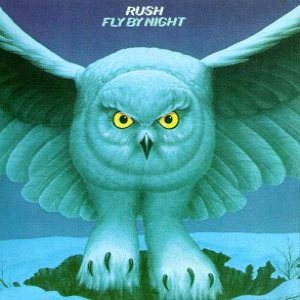 First, the positive – with the introduction of Neil Peart as drummer and lyricist, Rush took a quantum leap forward from their debut album in terms of lyrical content and musicianship. The album opener, “Anthem,” is a prime example of Rush at their early best – very fast, very aggressive, and lyrically strong. An instant classic. My personal favorite of the record is “Beneath, Between & Behind,” and of course there is one of the ultimate geek-metal moments in “By-Tor and the Snow Dog.”

But as with Vapor Trails, Fly by Night is weighed down with mediocre material (although I can excuse it more here, as the band was still in its formative phase). “Best I Can” sounds like a holdover from the first album, albeit one with superior drumming. “Rivendell,” while pleasant enough, is pretty unnecessary unless you’re J.R. R. Tolkien fanatic. And I have to admit I’ve never really cared for “In the End,” a rather pedestrian Zeppelin-esque epic.

If you don’t own the remastered version of this album, I recommend getting it. While it’s not a huge sonic revelation, it doesn’t feel as stuffy as the original version.

Just one word about Don Imus »