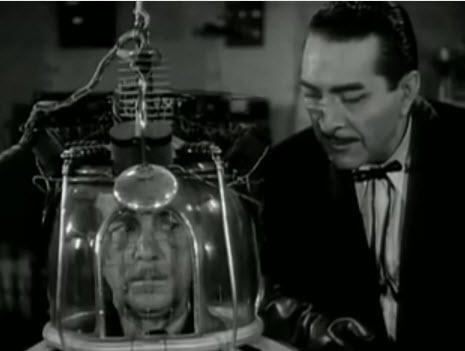 We’re back for the thrilling third chapter of the 1943 Columbia Pictures Batman serial, starring Lewis Wilson as the Dark Knight! In this installment, Batman narrowly escapes death while rescuing Linda Page from Dr. Daka’s henchmen.

Page’s father — Dr. Martin Warren (Gus Glassmire) — still in Daka’s clutches, refuses again to join Daka and is turned into a mindless zombie through the use of one of the more complicated contraptions I’ve ever seen in a movie.

Batman tries to lure Daka’s men into a trap by placing an ad for the radium gun he captured from them earlier. The plan fails, and the Dynamic Duo must race to stop Daka’s men from destroying a supply train and a bridge. Can they stop them in time?

« Album Cover of the Week: Miles Davis — Porgy and Bess

A Child’s Introduction to Jazz, Narrated by Cannonball Adderley »