Say Goodbye to US Airways, Finally 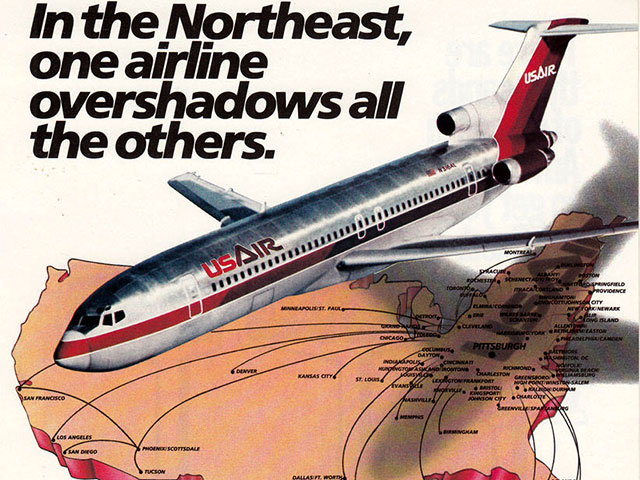 Now that the threat of a U.S. government lawsuit has been taken care of — via a nice out-of-court settlement — US Airways is finally free to complete its merger with American Airlines. When I published my post of the best logos for the top 10 U.S. airlines in August, I fully expected the merger to be completed imminently. But such are the wheels of justice I guess.

But with the recent announcement that the government’s case has been settled, the days of the US Airways brand are officially numbered. When the new airline rolls out in early 2014, it will carry the American Airlines brand only. Before that happens, let’s take a moment to remember what is still the 5th-largest carrier in the United States as of this writing.

As mentioned in the logo post, the ancestor company of US Airways is Pittsburgh-based All American Aviation, founded in 1937. When passenger service began in 1949, the company was renamed to All American Airways, but that only lasted three years.

In 1953 the carrier re-branded as Allegheny Airlines, one of the more successful regional carriers in the Northeast. By 1970 — two years after acquiring a smaller regional outfit named Lake Central Airlines — Allegheny boasted almost 1,700,000 scheduled revenue passenger miles. That total was bumped again in 1972 after Allegheny merged with Mohawk Airlines.

In 1979, following the passage of the 1978 Airline Deregulation Act, Allegheny morphed into yet another new identity in an effort to expand their routes and to start playing with the big boys. And thus was USAir born.

USAir’s expansion was modest but steady for their first several years, then took of exponentially in the late 1980s. In 1996 the company announced a slight re-branding, in the form of a name adjustment. USAir was no more, replaced by the more adult-sounding US Airways. The logo and livery got a more streamlined and corporate look, which I suppose made business sense but was a lot less fun.

The first attempt at a merger/acquisition for US Airways actually took place in 2000, when they announced a proposed deal with United Airlines. After objections from labor unions and the government, the deal fell apart in the summer of 2001.

US Airways was hit hard by the after-effects of the September 11, 2001 terrorist attacks and the company entered Chapter 11 bankruptcy on August 11, 2002. However, they received a government-guaranteed loan through the Air Transportation Stabilization Board and were able to exit bankruptcy in 2003. Two years later, after a second bankruptcy filing, the company merged with America West Airlines.

After several years of retrenchment and other aborted mergers/deals, the merger with American was announced in February 2013. It looks like it will finally be consummated almost a year after the fact. And this the nation’s #5 carrier will cease to exist, entering the brand graveyard and opening the door for Allegiant Air to crack into the top 10.