The Secret of McDonald’s’ Success? Not Hiring Women 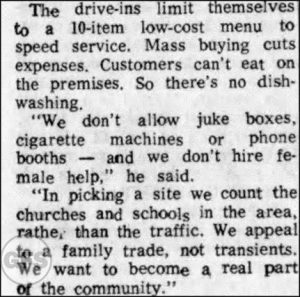 I know it’s kind of a cheap tactic to hold someone accountable for views they held decades ago, when society was very different, but I did a double-take when I read a quote from McDonald’s patriarch Ray Kroc.

Kroc, in an Associated Press interview published in several papers on September 15, 1959, cited several factors as to why McDonald’s was such a runaway success.

There were economic considerations such as a simplified menu and no in-store dining, but Kroc also seemed to focus on the type of image the chain should portray and the type of people they wanted working and dining.

In Kroc’s own words:

“In picking a site we count the churches and schools in the area, rather than the traffic. We appeal to a family trade, not transients. We want to become a real part of the community.”

So take note, transients and females, you should most definitely not bother looking for the Golden Arches.